Here is blogger Mish Shedlock on Arnold Schwarzenegger and public pensions (he allows CalWatchdog to reprint his posts):[1]

Now that Schwarzenegger is a certifiable lame duck (dead duck may be a more appropriate term) Schwarzenegger sees fit to take on public unions in a major way. It’s too late now (for him) even as he speaks the truth.

Recently some critics have accused me of bullying state employees. Headlines in California papers this month have been screaming “Gov assails state workers” and “Schwarzenegger threatens state workers.”

I’m doing no such thing. State employees are hard-working and valuable contributors to our society. But here’s the plain truth: California simply cannot solve its budgetary problems without addressing government-employee compensation and benefits. 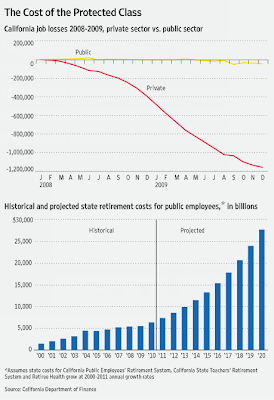 Thanks to huge unfunded pension and retirement health-care promises granted by past governments, and also to deceptive pension-fund accounting that understated liabilities and overstated future investment returns, California is now saddled with $550 billion of retirement debt.

The cost of servicing that debt has grown at a rate of more than 15% annually over the last decade. This year, retirement benefits—more than $6 billion—will exceed what the state is spending on higher education. Next year, retirement costs will rise another 15%. In fact, they are destined to grow so much faster than state revenues that they threaten to suck up the money for every other program in the state budget.

At the same time that government-employee costs have been climbing, the private-sector workers whose taxes pay for them have been hurting. Since 2007, one million private jobs have been lost in California. Median incomes of workers in the state’s private sector have stagnated for more than a decade. To make matters worse, the retirement accounts of those workers in California have declined. The average 401(k) is down nationally nearly 20% since 2007. Meanwhile, the defined benefit retirement plans of government employees—for which private-sector workers are on the hook—have risen in value.

Few Californians in the private sector have $1 million in savings, but that’s effectively the retirement account they guarantee to public employees who opt to retire at age 55 and are entitled to a monthly, inflation-protected check of $3,000 for the rest of their lives.

For years I’ve asked state legislators to stop adding to retirement debt. They have refused. Now the Democratic leadership of the assembly proposes to raise the tax and debt burdens on private employees in order to cover rising public-employee compensation.

Much needs to be done. The Assembly needs to reverse the massive and retroactive increase in pension formulas it enacted 11 years ago. It also needs to prohibit “spiking”—giving someone a big raise in his last year of work so his pension is boosted. Government employees must be required to increase their contributions to pensions. Public pension funds must make truthful financial disclosures to the public as to the size of their liabilities, and they must use reasonable projected rates of returns on their investments. The legislature could pass those reforms in five minutes, the same amount of time it took them to pass that massive pension boost 11 years ago that adds additional costs every single day they refuse to act.

All of these reforms must be in place before I will sign a budget.

I am under no illusion about the difficulty of my task. Government-employee unions are the most powerful political forces in our state and largely control Democratic legislators. But for the future of our state, no task is more important.

Schwarzenegger drones on and on about who is to blame. He also acts as if he was fiscally responsible.

That is far from the truth. In Turn out the lights California, the party is over[5] I blasted Schwarzenegger’s fiscally reckless proposals.

Well here we are, 9 months later and the $4.1 billion reserve went to a $14 billion deficit in the last 4 months.

Thank God Schwarzenegger did not get what he asked.

Now in massive revisionist history he attempts to take credit for being fiscally conservative. Please, let’s stop the charades.

While there is some truth he wanted concessions from unions, unlike Governor Chris Christie, he never fought for them very hard. Only now is he saying “All of these reforms must be in place before I will sign a budget.”

It will be interesting to see how this budget battle plays out, but no amount of hand-washing can absolve Schwarzenegger of his share of the blame.