CA residents most likely to go from poor to rich 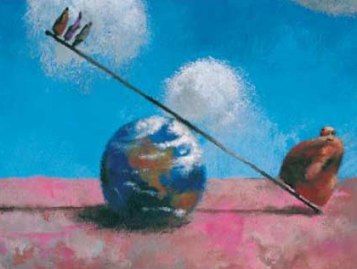 A massive statistical analysis[1] of upward and downward economic mobility in the United States that is getting big play on The New York Times website is loaded with fodder for interesting comments about American life. Here are the key conclusions drawn by David Leonhardt, the NYT’s often-excellent economics columnist/reporter:

“The study — based on millions of anonymous earnings records and being released this week by a team of top academic economists — is the first with enough data to compare upward mobility across metropolitan areas. These comparisons provide some of the most powerful evidence so far about the factors that seem to drive people’s chances of rising beyond the station of their birth, including education, family structure and the economic layout of metropolitan areas.

“Climbing the income ladder occurs less often in the Southeast and industrial Midwest, the data shows, with the odds notably low in Atlanta, Charlotte, Memphis, Raleigh, Indianapolis, Cincinnati and Columbus. By contrast, some of the highest rates occur in the Northeast, Great Plains and West, including in New York, Boston, Salt Lake City, Pittsburgh, Seattle and large swaths of California and Minnesota.”

Not just Silicon Valley — San Diego, Sacramento and L.A., too

But Leonhardt doesn’t make enough of California’s singularity in this latter category. Included in the NYT package is a chart showing the likeliness of sharp upward economic mobility by city. The chances of a child who grew up in the bottom fifth of family income (less than $25,000 a year) ending up in the top fifth of family income (more than $107,000 a year) are better in California than anywhere in the U.S. Here are the Top 10 cities for sharp upward mobility:

Six of the top nine cities are in California. In every one, at least one in 10 really poor kids ends up in the top fifth of income.

That certainly counters the Occupy-style rhetoric one encounters in the Golden State’s faculty  lounges and, too often, in newsrooms.

The value of impulse control — and the rise of ‘assortative mating’

But then the whole debate over income inequality in the U.S. has always been full of straw men, vapid class warfare and extreme rhetoric. The most significant gap in the U.S. isn’t between the wealthiest 1 percent and everyone else. As Charles Murray has documented[2], it’s between the 30 percent of people who tend to get married, avoid getting in trouble, value education and who have impulse control and the 70 percent of people who are less likely to have consistently positive habits and behavior.

“’Assortative mating’ further entrenches inequality. Highly educated men are much more likely to marry highly educated women than they were a generation ago. In 1970 only 9% of those with bachelors’ degrees in America were women, so the vast majority of men with such degrees married women who lacked them. Now the numbers are roughly even (in fact women are earning more degrees) and people tend to pair up with mates of a similar educational background.”

This is a profoundly important finding that shows more than anything else why Murray’s 30-70 gap is what matters, not the Occupy palaver. But it’s not nearly as good TV as saying the richest of the rich are out to subvert 99 percent of Americans for their own benefit.