Blue Baby Syndrome is a horrible disease. According to the World Health Organization[1], it is “caused by the decreased ability of blood to carry vital oxygen around the body. One of the most common causes is nitrate in drinking water. It is most important in bottle fed infants and water from wells in rural areas is of special concern.” 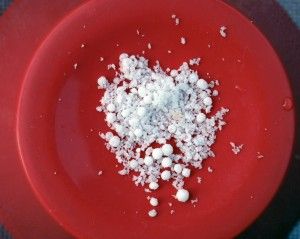 To deal with the problem in California’s rural areas, Assemblyman Henry T. Perea, D-Fresno, has introduced Assembly Bill 69[3]. According to the bill’s language, it “Establishes the Nitrate at Risk Area Fund to fund solutions for disadvantaged communities with nitrate-contaminated drinking water.”

The bill imposes a tax of 1 percent of fertilizer sold, which would be increased to 4 percent by 2016. As Legistats noted[4], “For the gardener, and additional 1 percent is probably not much, but this could add up for the large farmer, and will unfortunately not be a significant deterrent to putting nitrogen in the ground.”

As I will review, despite the alarmism, the science actually is against nitrates in the water causing Blue Baby Syndrome in California.

This study is being used in the California news stories to justify a statewide fertilizer tax to fund water improvements for unapproved residential encampments in rural areas that lack water service.

However, buried underneath the headlines, I found that the study was conducted not on wells in California, but on wells in Texas and Iowa.

In addition, the study:

* Did not disclose if new mothers were asked if they had taken at least 400 milligrams of folic acid during pregnancy[6], which prevents most birth defects.

* Did not disclose mothers were asked how much alcohol they consumed during pregnancy, which could also cause birth defects.

* Was unable to definitively conclude that nitrates caused birth defects. That’s because the research design of the study was not based on clinical data or on the scientific method but on the subjective recollections of mothers and estimates of how much water was consumed.

Nitrate is produced naturally from decomposed vegetative matter, animal waste and fertilizer used in farming and home landscaping.  At high dosages, nitrate can cause birth defects and “Blue Baby Syndrome,” as well as providing health benefits such as treating cardiovascular disease[7].

The Texas A&M study is contradicted in a presentation by Bruce A. Macler[8], a PhD in biochemistry at the University of California, Berkeley. He presented his paper,  “Reactive Nitrogen Research Workshop,”[9] to the U.S. Environmental Protection Agency Region 9 workshop held June 4 and 5, in Fresno.

* Bacterial contamination or illness is a co-factor.

Macler’s[11] review of 42 cases of Blue Baby Syndrome and other birth defects in California conducted by the U.S. EPA over 13 years showed:

* No cases were associated with nitrate;

* Only four of 42 cases were located in areas where wells are used;

* National figures are similar: it is rare to find a clear association with drinking water;

* There is no direct “smoking gun” of nitrates and cancer;

* High nitrate doses in animals do show effects but human data tends to be negative;

* Perchlorate, which is a potential health threat by blocking iodine absorption to the unborn and infants, is 240 times more potent than nitrates;

* Products like Benzocaine, an anti-itch ointment, improperly used by parents to treatment diaper rash could be a cause of Blue Baby Syndrome.

Macler further reported that only 37 smaller local water systems in California, serving 12,000 people (0.03 percent of state population), are currently out of compliance with the nitrate Maximum Contamination Level and all making progress to comply.

The AB 69 bill analysis also noted, “A recent University of California at Davis (UCD) report[13], Addressing Nitrate in California’s Drinking Water, showed that nitrate loading to groundwater in the area is widespread and chronic, and is overwhelmingly the result of crop and animal agricultural activities.”

However, the UC Davis study merely looked at the occurrence of nitrate in four rural counties. It mistakenly defined nitrate contamination with its occurrence in the environment.  Occurrence is not necessarily contamination.   Nitrogen is everywhere; 78 percent of the air we breathe is nitrogen.  Without nitrogen, plants won’t grow.

Nitrate is in most of the vegetables we eat.  Nitrosamines[14] are potentially cancer-causing and can be produced by frying food.  Nitrosamines are also produced naturally in the human body by enzymes.  According to Macler[15], nitrate and nitrite do not “demonstrably” cause cancer.

So this is a tax increase to solve a problem that doesn’t exist.

When the Legislature returns from its recess, AB 69 will be taken up in the Committee on Agriculture in the state Senate.