A. The two-term New York City mayor running for re-election; whose wife is played by the shockingly beautiful Catherine Zeta-Jones; who cut taxes and now is trying to tear down a slum to build office buildings for “yuppies.” (Are there still yuppies? Isn’t today’s preferred nomenclature “Metrosexual”?) While killing people.

B. The young, youthful, energetic city councilman, who’s running for the mayor’s job on a reform platform of taxing “rich” people, those making $200,000 or more a year, to build more housing for the poor. ($200,000 in salary in the Rotten Apple means you’re just cracking into the middle class.) 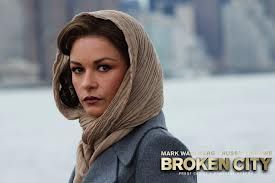 Based on its preview, I thought “Broken City” might be a decent Big City crime thriller. Starring were three of my favorites, Russell Crowe as the mayor; the stunningly beauteous Zeta-Jones; and Mark Wahlberg as a compromised ex-cop. Supporting roles went to some fine actors: Barry Pepper as the young, youthful,  energetic reform challenger; and Jeffrey Wright as the police commissioner.

Crowe is a great actor, but was just wrong for this role. Or maybe he just mailed in his performance to get a check. I kept comparing him to Al Pacino chewing up scenes in “City Hall,[2]” another NYC political drama that didn’t have that great a plot, but which Pacino made his own.

Hey, here’s a better idea for a movie: Show how NYC’s “temporary” rent control [3]from World War II, a war that ended 68 years ago, instead of helping the poor, destroys their housing. Compare NYC to Houston, where housing is cheap because of not just no rent control, but no zoning.

Main character: a crusading libertarian NYC mayor who seeks to end rent control and zoning, but faces murderous government regulators who hire the mafia to bump him off. Actors: The libertarian mayor is played by James Woods, who’s actually a libertarian in real life. The head government bureaucrat is played by Arnold Schwarzenegger.

I’m ready to write the script when Hollywood gives the OK.