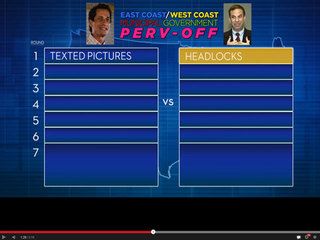 The Bob Filner saga continues to unfold in San Diego. The biggest news is that a gay-baiting gay activist is apparently backing off what once looked like a clear attempt to sandbag[1] a nascent recall of the grabby mayor.

This is from a U-T San Diego editorial[2] I wrote:

“The decision of two recall proponents — land-use consultant Michael Pallamary and gay activist Stampp Corbin — to combine their efforts to oust Mayor Bob Filner is good news for those who believe in direct democracy.

“That is the system established in California in 1912 to allow voters to use signature-gathering campaigns to directly enact laws and remove lawmakers. In recent years, it’s been subverted on many fronts …. .

“The monkey-wrenching has been led by political forces who want to preserve the status quo that is targeted by signature-gathering campaigns for initiatives or recalls. Initially, it looked like that was Corbin’s goal. As 10News reported, Corbin told Susan Jester, head of the local Log Cabin Republicans, that he intended to sabotage the recall.

“But Corbin insists that he was joking. On Friday, he promised to work constructively with Pallamary in gathering signatures of San Diegans who are tired of Filner’s mistreatment of women, his bullying of everyone and his ethical breaches.”

In another piece, I took on the goofy idea from the East Coast media that Filner was protected by a fawning media. Just because that’s how D.C. treats the president doesn’t mean that’s the norm for how a big-city mayor is treated on the other side of the nation:

“As the national media descend on San Diego to cover our sexist caveman of a mayor, some wonder how career politician Bob Filner could have made it to age 70 without being exposed as a serial cad. The answer, of course, is that until last month, no woman was willing to come forward with public accusations. The idea that his behavior was covered up by a fawning media is absurd. Filner’s temperament was a constant focus of the 2012 campaign.

“[This is why no one] in local media and political circles is surprised by Filner’s scandal. He has a long history of thuggishness — one that has led to brushes with law enforcement and endless tales about his insolent belief that the normal rules of conduct and decorum simply don’t apply to him. It’s no surprise that this thuggishness leads Filner, in his word, to act like a ‘monster’ toward women.”

His misconduct extends far beyond this

“This thuggishness has been on ample display in his eight months as mayor in other areas besides his dealings with women. He has thrown tantrums at City Council meetings, both in public and in closed session, including once using his security force to eject a representative of City Attorney Jan Goldsmith on spurious grounds. He has been caught in lies about his possibly criminal efforts to force a developer to give $100,000 to his pet causes before getting a key project permit. He has used a silly cover story as a pretext to force out the head of the city employees’ pension board. Why? Because the official didn’t want to go along with what he saw as the Filner administration’s attempts to resume the pension underfunding that got San Diego into such terrible straits in 1996 and 2002.

“Filner’s arrogant contempt for anyone who gets in his way is reflected by his staff. Officials simply refuse to comply with state openness laws. His chief of staff, Lee Burdick, appeared to be interfering with sex-harassment investigations by interviewing potential witnesses. She also makes the bizarre claim that since she is an attorney, her communications with the mayor are privileged — though she’s not the mayor’s attorney.”

The mayor’s broader history of corruption, malfeasance and contempt for the law is cited in official declarations filed by lead recall proponent Michael Pallamary. I think that is a big mistake. Some of the other scandals can and will be depicted by Filner and his allies as him standing up to a city status quo that protects downtown business interests. That produces a Pavlovian response[3] among progressive voters, who can’t believe a longstanding Democratic registration advantage[4] has yielded a relatively tight-fisted government that has pushed big reforms on benefits, pay and provision of services, led by former Republican Councilman Carl DeMaio, a libertarian[5].

Just focusing on the sex harassment would have been a much easier sell. But I don’t buy the conventional wisdom that a lot of money will be needed for the recall to win. The disgust with Mayor Headlock is broad and deep, and tens of thousands of people aren’t going to need persuading to sign a recall petition.