Obama allows Congress out of Obamacare

As the layers of Obamacare are peeled back, we have discovered the many different groups exempted[1] from the health care nightmare. 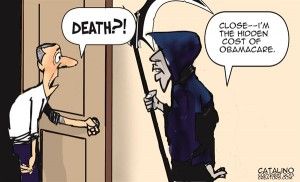 The latest scandalous executive order from President Obama exempts one particularly powerful entity: Congress. Obama did so via  executive order because he could not let it be debated by the U.S. Senate or House of Representatives. The complaints with Obamacare are many; a public debate would have been disastrous, even if the mainstream media continued to ignore it.

Is anyone in California listening? I surmise the next exemption from the Obamacare health plan will be the California Legislature.

Avoiding what they created

The Wall Street Journal reported[3] today that Obamcare, officially known as the Affordable Care Act[4], actually specifically required members of Congress and their staffs to participate in its insurance exchanges. The idea was to make sure they have first-hand experience with the government health plan they’re about to impose on their constituents.

But members of Congress and their staffs know too much. Not only do they know what’s in Obamacare, many of them helped write it. And they don’t want it. It was written for the unwashed masses, not for the elite of the government.

With his magic executive order pen, Obama suspended the requirement for Congress. Instead of paying for the substandard health care as they are imposing on the rest of the great unwashed, “Congress will receive extra payments based on the Federal Employee Health Benefits Program[5] defined-contribution formula.” According to the WSJ, this “covers about 75 percent of the cost of the average insurance plan. For 2013, that’s about $4,900 for individuals and $10,000 for families.”

“It is important to note that the Congressional Budget Office projects only 2 percent of Americans will actually pay the ‘mandatory’ fine for non-participation,” I wrote[6] in June.

Not only can you not keep the health plan you like, the new government plan foisted on you will cost you more — especially with all of the exemptions allowed by the White House. The base of those who should be in the plan, and paying for it, is shrinking. So the cost is already going up.

The Wall Street Journal said[7] this is illegal. “Office of Personnel Management has no authority to pay for insurance plans that lack FEHBP contracts, nor does the Affordable Care Act permit either exchange contributions or a unilateral bump in congressional pay in return for less overall compensation,” the WSJ said[7]. “Those things require appropriations bills passed by Congress and signed by the President.”

This is from my June story about Obamacare exemptions[8]:

The proposed regulations also catalog the statute’s nine categories of individuals who are exempt from the shared responsibility payment:

These exemptions leave only the working middle class and those who pay income tax to pick up the tab.

The half of Americans who do not pay federal income taxes will not be required to pay the “mandatory” IRS fine if they do not buy government health insurance.

Illegal aliens will not be fined.

And just in case anyone else was missed in the exemption list[9], the last paragraph was added to cover any other vulnerable group: