Earlier this week, former state Sen. Gloria Romero published a lengthy article in the San Diego Union-Tribune entitled “Fixing California: The union chokehold[1].” It described how public sector unions, virtually unopposed, have undermined the effectiveness and overpriced the costs of government at all levels in California. 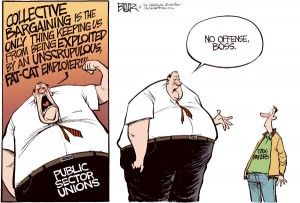 [2]Romero, a Democrat who served as Senate majority leader, knows what she’s talking about. Her focus is on education, where the teachers’ unions have blocked meaningful reforms for years by protecting bad teachers from being terminated, promoting based on seniority instead of merit, taking over local school boards with hand-picked, union-financed candidates, attacking charter schools, prioritizing teacher compensation and job security over student achievement, and pushing a social agenda in front of academic fundamentals. Romero considers it a civil rights issue, since the negative impact of the union takeover has disproportionately harmed public education in low-income and minority communities.

What Romero discusses publicly — criticizing not only teachers’ unions for undermining public education, but also public safety unions for pricing their services beyond the ability of cities and counties to afford them — is privately echoed by Democratic lawmakers throughout California. And it should come as no surprise that Romero, along with virtually all Democratic lawmakers, places equal if not greater blame on the corrupting influence of corporate special interests in Sacramento.

But there’s another crucial connection: Public sector unions have an identity of interests with those elements of capitalism they decry the loudest, the crony capitalists and the casino bankers. If this is understood by Democratic legislators, or even Republicans, it is rarely articulated. And to the extent it is understood, awareness has yet to translate into proposals, much less into action.

The alliance between public sector unions and entrenched private-sector elites is not an adjunct point to be recognized, acknowledged and forgotten. It is the primary underlying cause of some of America’s most challenging threats, including economic stagnation, increased stratification of wealth, financial insolvency, mediocre education outcomes, and eroding civil liberties.  As I explain in “Why Public Sector Unions are Special Special Interests[3]”:

“This reality, that public sector unions operate at the heart of the corporate and financial elite, that they are the brokers and enablers of corporate and financial power, is the tragic irony that is lost on California’s electorate. Public sector unions are the foot soldiers of corporatism, because without their blessing and support, crony capitalists would not successfully lobby for anti-competitive laws, pension bankers would not have a taxpayer-guaranteed virtually unlimited source of funds to invest, and bond underwriters would not be collecting commissions on hundreds of billions in bond issues necessitated by spending deficits. Public sector unions are also the facilitators of authoritarianism, because every new law and every new intrusion on civil liberties is accompanied by a need for more unionized government workers.”

Evidence of the connection between public-sector unions and crony capitalists is everywhere:

* “Carbon emissions auctions” set to extract more than $2 billion from ratepayer supported utilities in November 2013, eventually increasing to over 10 times that much annually, so financial traders can make a killing in commissions, crony capitalists can access funds for “green” projects that ought to be able to withstand the scrutiny of genuine venture investors, and public entities can collect financial windfalls for enacting “smart growth” ordinances and by redefining jobs to include “global warming mitigation.”

* California’s $370 billion in state and local government bond debt, rolling over every five to 30 years, earning billions in commissions to financial interests, and enabling deficit spending by governments that can’t afford to pay their unionized workforces.

* Anywhere between $200 and $600 billion (or more) in unfunded public employee pension and retirement health care obligations, that financial interests will make additional billions in fees to invest, once their attorneys, working in tandem with public sector union attorneys, compel taxpayers to fork over the money.

This is the context in which one of California’s teachers’ unions produced a video cartoon a few months ago, showing the caricature of a rich tycoon urinating onto a crowd of poor people. The irony is only matched by the hypocrisy.

Romero distinguished herself last year by supporting Proposition 32[4], which would have merely required anyone collecting political contributions via payroll deductions to ask for permission once a year. Because passage of Prop. 32 would have threatened the money pouring into public sector unions, Romero’s support was an act of extraordinary courage.

Ed Ring is the executive director of the California Public Policy Center[5], and the editor of UnionWatch.org[6].