SACRAMENTO — Before the City of Sacramento races to spends $200-$300 million of public funds to build a professional sports arena in downtown Sacramento, many want the issue put before the voters. Again.

Sacramento’s previous arena deals were totally discredited by the Sacramento Grand Jury[1]  after voters refused to pass Measures Q and R in 2006. The measures would have approved a quarter-cent sales tax increase and directed the revenues to fund a new sports and entertainment facility. The Grand Jury investigated[2] the arena issue because they wanted to find out “if the City and County of Sacramento deceived their citizens regarding their dealings with the Kings.” According to the Grand Jury, the City and County of Sacramento did deceive the citizens. 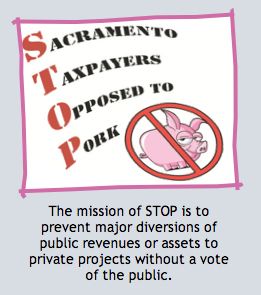 Here we are again, with the worst kind of déjà vu.

The Sacramento City Council voted Tuesday to consider invoking the threat of seizing control of  property through eminent domain, in order to land the downtown property for a new arena.

“By a 7-2 vote, the Sacramento City Council agreed Tuesday night to join the Sacramento Kings[4] in negotiating with the owner of the Macy’s furniture and men’s clothing store at the Downtown Plaza over the purchase of the soon-to-be vacant property,” the Sacramento Bee reported[5] today.

The city calls this “negotiating.”

And Sacramento already has a professional sports arena, which has been home to the Sacramento Kings since 1985.

Under a preliminary term sheet for the financing of the arena project, approved by the city council earlier this year, the Kings are responsible for acquiring the property for a new arena. The new ownership group purchased most of the Downtown Plaza in May. But Macy’s department store is still located exactly where the group wants the arena to be built.

Legal battle brewing, with a little help from friends 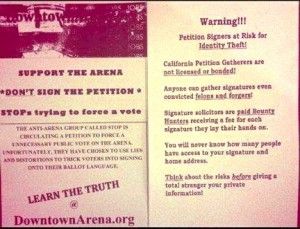 Sacramento Taxpayers Opposed to Pork[7] was formed in 2012 by a group of concerned citizens to oppose a public subsidy to build an arena. STOP favors a privately funded arena, but opposes this multi-million dollar public subsidy without voter approval.

“From the beginning, community activists asking real questions about the City of Sacramento’s arena deal have wondered if they are being attacked by an Astroturf-like opposition fronting for arena developers,” Tab Berg told me; he’s a Sacramento political consultant who also wants the arena project to go before the voters.  “Now they know the answer is: ‘Of course they have.'”

Berg and STOP have been the subject of a full frontal assault by proponents of building the arena. It started with scare tactics over the signature gatherers pushing the public vote. A pro-arena group calling itself DowntownArena.org [8]passed out flyers claiming the signature gathers could be felons and forgers, and may not be bonded or licensed. The group largely is made up of contractors that would benefit from the tax-funded arena, such as Associated General Contractors and the Associated Plumbing & Mechanical Contractors of Sacramento.

“Think about the risks before giving your information to a total stranger,” the flyer said.

According to Berg, “They’ve already carpet-bombed the city with fear-inspiring robo-calls, made up quotes, secret surveillance ‘gotcha’ videos and staged photos,” all in an attempt to discredit the folks working on the arena initiative campaign.

“Opponents of the initiative, most of whom don’t live or vote in the city, are using every trick in the book to stifle local democracy by opposing city residents from having a say on arena subsidies,” Berg said. “In addition to phony claims of secret money, they are fomenting phony fears of voter identity theft and phony claims that the campaign is led by ‘outsiders.’  Even more outrageous are their false claims that signature gatherers are lying about the fact that the arena deal will lead to higher city taxes.

“By diverting over $15 million per year from city coffers to service arena bond debt, the arena deal will hammer city budgets and will almost certainly lead to higher city taxes down the road, or alternatively, deeper cuts in already badly depleted city service levels. The city’s argument that the arena will fund itself through various ‘backfill’ revenue items is specious.”

“Our analysis shows that almost every claimed ‘backfill’ revenue source is unsupported by fact or reason, much like their unsupported, gross undervaluation of city parcels slated to be handed over to arena developers. Even the city treasurer faults city staff for ignoring the value of 3,700 prime garage spaces being gifted to arena developers.”

As Berg and STOP started to gather a head of steam, arena proponents pulled another trick out of their magic bag.

In a carefully calculated distraction, DowntownArena.org[9] even filed a Fair Political Practices Commission complaint on Berg, claiming he broke the law by not disclosing whose money he is spending.

Local media reported[10] Berg was representing the law firm of the former owners of the Sacramento Kings, but had not disclosed this.

But Berg said his role was totally above board: “I’ve been clear on my role: In June, I was asked to help promote STOP’s arena vote initiative.  I provided Taxpayers for Safer Neighborhoods an agreement and an invoice.  They never executed the agreement and never paid me.”

Many of the Sacramento media also favor this publicly-funded arena.

The blighted problem area in downtown Sacramento is entirely the fault of the city and its lousy property management. The city is responsible for driving the downtown K Street Mall area from a once-bustling pedestrian mall filled with independently owned shops and department stores, into a crime laden, blighted area replete with abandoned buildings and homeless people — after spending hundreds of millions of dollars in redevelopment money on the space. It sounds ripe for repeat with the Arena.

Many voters say they are not opposed to a sports arena in downtown Sacramento, but they are opposed to the  75 percent public subsidy by the taxpayers. If the developers involved in the arena deal can make a go of a new arena in Sacramento, they should. But it appears this deal can’t stand up to any financial scrutiny without the city of Sacramento bringing the bulk of the money to the table.

“What do the proponents have to fear from a free and open public debate and a public vote?” Berg asked. “If the deal is such a good deal for the city and taxpayers, proponents shouldn’t have any trouble convincing voters of that fact.”