Two election bills caused a stir in the Assembly Elections and Redistricting Committee [2]last week. The first, SB 27, I covered in Part 1 [3]of this series. 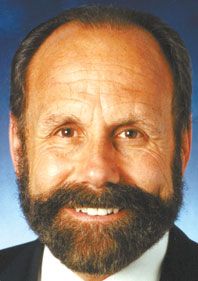 A second bill concerns the use of taxpayer funds for political campaigns, which already is banned by law. But SB 594 is clearly aimed at certain quasi-government organizations which may have found ways to slip around the law by using nonprofit organizations to do their campaigning for them.

The bill, by Sen. Jerry Hill, D-San Mateo, now seeks to limit nonprofits’ use of public funds to support ballot measures. But the bill language has not been updated online.

At the Elections Committee hearing Aug. 13, Mike McGowan, currently a Yolo County Supervisor, pointed out Hill’s bill specifically exempted the education community from lobbying activities under scrutiny. He also is the former head of the California State Association of Counties[5], one of the bill’s targeted organizations.

Assemblyman Tim Donnelly, R-Twin Peaks, said he appreciated the spirit of the bill, but was concerned with the educational exemption, even with Hill’s assurance of an amendment.

Sen. Hill was quick to acknowledge this exemption and assured the committee he would accept amendments to the bill to include in the ban the politically active educational community, including the California Teachers Association and the California Federation of Teachers.

Whom is the bill targeting?

The other major target of the bill is the League of California Cities,[6] whose mission is to expand and protect local control for cities through education and advocacy. So it opposes SB 594. Since taking office in 2011, Gov. Jerry Brown has already taken a significant amount of local tax money for his budget, claiming it was needed to shore up the state’s budget deficit.

The league challenged the state legally over the dismantling of redevelopment agencies, which shifted $1.5 billion a year from the cities to the state. But the league lost in court. And the league has raised money to support ballot measures to protect municipal funds from another state take-away.

Through CITIPAC[7], the league’s political action committee, the league actively campaigns for ballot measures and other issues relevant to the interest of California cities.

Dan Carrigg, legislative director for the league[8], sent a letter to Hill expressing the League’s displeasure with SB 594[9]. “According to the analysis … you allege that nonprofit organizations such as ours are co-mingling public and private resources and ‘using the co-mingled funds for campaign activity.’ … the analysis asserts you indicate there is a ‘credible reason to believe that nonprofit organizations are making campaign expenditures from accounts that are financed in whole or in part with public dollars. We completely reject this allegation.”

At the hearing, Carrigg said the league “has scrupulously adhered to all legal requirements associated with ballot campaign activity” and that it “regularly advises its members on the scope of the existing use of public funds prohibition.”

On its website, the League said, “The bill’s author, Sen. Jerry Hill (D-San Mateo), claims SB 594 seeks transparency, when in reality it is an end-run effort to target organizations from expressing their policy positions on statewide ballot measures.

“SB 594 creates a new mechanism to punish local government organizations for representing its members in the political process. SB 594 is based on unfounded allegations that nonprofit organizations are ‘co-mingling’ public and private resources.”

Donnelly said, “For SB 594 by Jerry Hill, the only attempt to curtail the illegal use of public funds for campaigning, ironically exempted the use of schools and school personnel. That is until he agreed to take my amendment to include them in Assembly elections committee this week.”