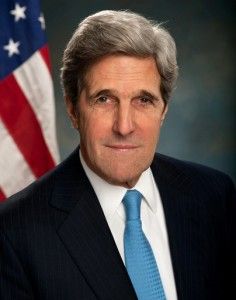 [1]One of the biggest snobs ever is John Kerry, now the U.S. secretary of state. He wants to rule our lives without us objecting. And he doesn’t like it that the Internet makes it easier for us to find out what’s going on and object. He said on his recent trip to Brazi[2]l:

“I’m a student of history, and I love to go back and read a particularly great book like Kissinger’s book about diplomacy where you think about the 18th, 19th centuries and the balance of power and how difficult it was for countries to advance their interests and years and years of wars. And we sometimes say to ourselves, boy, aren’t we lucky. Well, folks, ever since the end of the Cold War, forces have been unleashed that were tamped down for centuries by dictators, and that was complicated further by this little thing called the internet and the ability of people everywhere to communicate instantaneously and to have more information coming at them in one day than most people can process in months or a year.”

What an elitist. He longs for a world when the Elite, like him, “process” everything, and the rest of us are left out. He continued about the Internet:

Actually, the Internet makes it easier for people to “find the common interest.” Just 20 years ago, it was difficult to find libertarian publications. Now it’s easy to find such sites as LewRockwell.com[3] and Antiwar.com[4]. Of course, those sites relentlessly criticize him. So I can see why he doesn’t like it and wants to go back to the days of the Elite controlling information.

As to “a rise of sectarianism and religious extremism,” there’s been a lot of that over the ages. Nothing new. But except for North Korea, we no longer have the secular regimes that murdered tens of millions of people in the last century, especially religious people. Even Castro’s Cuba is pretty tame now. That’s largely due to the communications revolution. It’s a lot harder to perpetrate an Auschwitz or a Gulag today because people would write about it on the Internet, and Google Maps would provide satellite pictures.