A natural bacterial colonization process could end the proposed regulation of agricultural nitrate and taxation of fertilizer in California.  Energy costs to produce synthetic nitrogen fertilizers could also be eliminated.  It could also eventually render unnecessary overkill stormwater regulations in Los Angeles County, as well as put a damper on the market for organic food products. 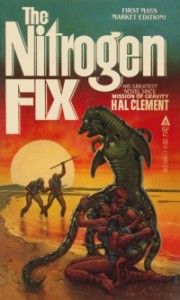 [1]Researchers at the University of Nottingham Center for Crop Nitrogen Fixation[2] in Britain have announced a breakthrough that could make it unnecessary to use potentially polluting and energy intensive fertilizer to grow crops.  The process occurs naturally and does not involved bioengineering or genetic modification.

In areas of Brazil, sugarcane[3] has been grown continuously for more than 100 years without any fertilizer.  It is well known that beans, lentils, peanuts, soybeans, alfalfa, clovers and some flowers also grow naturally by taking nitrogen from the air rather than from the ground.

Now a new potentially world-changing breakthrough may allow all crops to grow by taking nitrogen from the air rather than from synthetic fertilizer.  The air[4] both humans and plants breathe is composed of 78 percent nitrogen, 21 percent oxygen, and 1 percent argon, carbon dioxide and other gases.

The process discovered by leading world expert Prof. Edward Cocking of the University of Nottingham is called “nitrogen fixation.”[5] Cocking[6] discovered that sugar cane is able to use nitrogen from the atmosphere to grow as a result of bacteria that grow on the roots of the sugar plant.  All that is necessary to colonize other plants so they can absorb nitrogen from the air is to coat plant seeds with the same bacteria and sucrose.

California is about to launch a vast and expensive program of regulation of nitrates in agriculture. Most of the concern is over a non-existent “Blue Baby Syndrome” crisis[7].   Assembly Bill 69 would impose a tax of 1 percent on all fertilizer.  This wouldn’t hurt home gardeners very much but it would hit farmers hard.

One of the major concerns about urban stormwater runoff[9] is nitrates and phosphorous that drain from residential lawns, golf courses and city parks (in addition to motor oils and trash).  Assembly Bill 2554[10] passed in 2010 and will impose heavy taxes on businesses and industries, as well as on large landowners such as school districts and cities, to reduce stormwater runoff in Los Angeles County.

A health concern is the flow of nitrates into streets, storm drains and flood channels that go to the ocean and create a nuisance to surfers and swimmers at beaches.  Reducing the use of fertilizer for lawns and golf courses by the innovative “nitrogen fixation” of common lawn grasses might render such taxes unnecessary.

Bio-remediation Instead of Regulation of Perchlorate

Parallel research recently conducted at the University of Massachusetts at Amherst[11] has found that a sulfur-utilizing bacteria could be used to bio-remediate agricultural perchlorate at a fraction of the expensive cost of current industrial treatment methods.

Perchlorate is a natural salt that is a potential blocker of essential iodine needed by infants and children for normal growth and development.  Overly strict regulation of perchlorate based on unrealistic science[12] has forced the shutdowns of water wells and the expensive treatment of drinking water by industrial methods.

It is anticipated that N-Fix methods will be available in as short at two to three years[13].  California would be unwise to create huge regulatory bureaucracies and programs to regulate agricultural nitrates and urban stormwater runoff. All that may soon be unnecessary.