A big labor union in the state wrote a bill to defund a non-profit that actually recovers money for workers who are cheated out of wages by unscrupulous contractors. 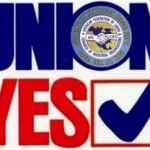 SB 776[2], authored by Sen. Ellen Corbett, D-San Leandro, but written and sponsored by the union labor group State Building and Construction Trades Council of California[3], appears to be an effort to eliminate monitoring and enforcing prevailing wage laws through independent compliance audits and the enforcement of building contractors.

The targeted independent compliance group, the California Construction Compliance Group[4], is a  non-profit organization that promotes free, open and vigorous competition in the building and construction industry. On its website[5], the CCCG explains that it does this “through monitoring, enforcing and evaluating changes to prevailing wage and apprenticeship laws in an effort to promote equal opportunity among prevailing wage contractors.”

Fast tracked since it was introduced February 22, SB 776[2] already sits on Gov. Jerry Brown’s desk awaiting his signature or veto.

The Assembly Labor and Employment Committee passed SB 776 easily in a 5-2 vote, as did the Assembly Appropriations Committee, 12-5. The Assembly then passed the bill 52-23, also along party lines.

I called Gov. Brown’s office and asked if the governor has a position on SB 776 yet. His office has been quiet on this union-friendly bill.

“The Governor has until August 27th to act on this bill,” reported Jim Evans, a spokesman for Brown. “We will definitely let you know when he takes action.”

The bill’s author, Corbett, is a liberal Democrat running for Congress. Some say Corbett needs to take out moderate Democratic incumbent, Rep. Eric Swalwell[7], D-Pleasanton, which will require huge union support. Corbett thus far is behind in the money race.

But Corbett is a friend of labor unions. Even her “Ellen Corbett for Congress” campaign website reports[8] it is “Computer Generated / Labor Donated.”

“This is a total union overreach and is only being done because we are non-union,” said Loudon. “We have recovered over $400,000 for workers, most recently over $13,000 from one union glazer-window installer.”

“We find workers shorted pay every time we do an audit,” Loudon said. “If we are out of the business of monitoring and enforcing the prevailing wage, more workers will be harmed, more contractors will get away with it and be emboldened and they will continue to take work from honest contractors.”
Loudon said the compliance group remains hopeful Brown will put the interests of workers over the labor union leaders “who either do not understand or do not care what we do.” Loudon added: “Governor Brown has huge labor support but he also has a famous independent streak, so I am hopeful he can see his way to send this bill back.”
Endnotes: