This [1]is from William Norman Grigg, America’s best reporter on police brutality: 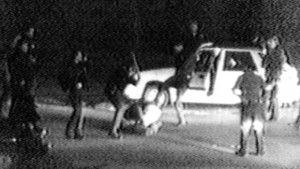 After eluding the police for more than a week, Alejandro Gonzalez surrendered in San Jose on January 10, 2011. The 22-year-old was the suspect in a non-fatal shooting that had taken place on New Year’s Day at a local bar called the Mucky Duck.

As should be expected, the police had done nothing useful to solve that crime. Their only contribution to the case was to stage a lethal SWAT raid against a man who had been nowhere near the bar when the shooting took place, and had nothing to do with it.

Four days after the Mucky Duck shooting – in which three people suffered non-life-threatening injuries — a multi-agency SWAT team invaded the home of 31-year-old Rogelio Serrato, Jr. [3] Serrato, who was known as Roger to friends and family, was not a suspect in the shooting.

The search warrant issued for Serrato’s house should have been executed by a small group of deputies. Although police contended that Serrato was “connected” in some way to Gonzalez, there was no reason to suspect that he was harboring the fugitive.

Serrato did have outstanding misdemeanor warrants, however, and apparently this was considered sufficient justification for sending in two dozen paramilitary drag queens who arrived in an armored convoy that included a Bearcat combat vehicle[4].

For about an hour, the invaders broadcast surrender demands via a “thunder-hailer” megaphone. One young female left the house and was taken into custody. Serrato – who, it is believed, was intoxicated and perhaps unconscious – didn’t comply.

A three-member “break and rake”[5] team approached the house, shattered a window, and threw in a flash-bang grenade, which lodged itself between two highly flammable polyurethane sofas that were next to an artificial Christmas tree. One of the sofas immediately ignited. The fire quickly propagated itself through the house, generating a dense black cloud of highly toxic smoke.

Roused by either the sound of the grenade or the subsequent fire, Serrato began screaming and trying to leave the house. The sight of the unarmed man, clad only in his underwear, threw a scare into Sergeant Joseph Banuelos, who had supervised the “break and rake” team.

“Suspect!” shrieked Banuelos. Rather than rushing into the home to arrest the suspect, the intrepid sergeant – acting in the interests of that holiest of all considerations, “officer safety” – ordered his team to retreat to the Bearcat vehicle. The SWAT team then trained its weapons on the house, which effectively prevented the victim from escaping from the burning building.

Significantly, the use of a flash-bang grenade as a “scare tactic” was part of the raid’s tactical plan, rather than an improvised measure. Deputy Mark Sievers and Detective Al Martinez, who were part of the “break and rake” team, had previously ignited fires with flash-bang grenades, so they were aware of the potential fire risk involved in using that device. That the raid posed a potentially fatal fire danger is further demonstrated by the fact that the Greenfield Fire Department had been notified of the planned raid and was on standby.

The Fire Department responded quickly once fire enveloped Serrato’s home – but the SWAT team held them at bay for nearly a half-hour while the screaming victim was trapped inside. By the time the firefighters could enter the home, Serrato was dead.

Just a few days ago, Monterey County agreed to a $2.6 million settlement[6] with Serrato’s family, which was paid by the county’s insurance carrier and absolves the sheriff’s office of legal responsibility. Speaking the language of institutional self-exculpation with remarkable fluency, County Attorney Charles McKee insisted that Serrato was to blame for his own death and that the officers should be “commended for trying to resolve a very tense situation.”

It’s often said that police are the country’s most dangerous street gang. One significant distinction between police and their private sector counterparts is that street gangs don’t expect to receive commendations when they kill innocent people.

It would be a wonderful thing if people could develop the intellectual equivalent of a computer utility that would remove uniforms, badges, and titles from news accounts of fatal police raids. Subtracting the indicia of “authority” would enhance the ability of people to see the truth about acts of aggressive violence, and recognize them as crimes irrespective of the claimed identity of those who commit them.

The killing of Roger Serrato was an act of murder through depraved indifference. The assailants had no justification to attack his home; they knew that their plan of attack posed the risk of a catastrophic fire; once that fire began, the assailants took no action to rescue the victim, and impeded the efforts of others to do so.

The SWAT raid was a specimen of police overkill born of opportunism: What’s the use of having a SWAT team unless it can be deployed to arrest people with outstanding misdemeanor warrants?