‘There’s no state tax in Houston’ 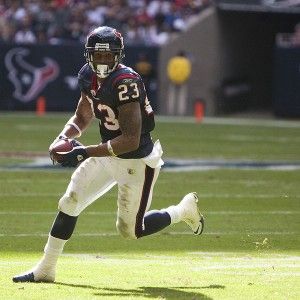 [1]The Houstan Texans fielded a young team last year that won through the first round of the playoffs, then lost to New England in the divisional round. They’re looking to make it all the way to the Super Bowl this year. Although I’m rooting for my hometown Detroit Lions to finally shrug off the Curse of Bobby Lane [2]and become the first team to win 19 games in a season, including the Super Bowl.

Anyway, the Texans players held an annual luncheon in Houston. Some of their comments[3]:

[Brian] Cushing drew applause when he said the two biggest differences between Houston and his native New Jersey are that people in Houston are actually nice and he now gets to pump his own gas.

But [Arian] Foster stole the show when a question concerning the “Best thing about living in Houston” was submitted.

Unlike, of course, in California, where the top state income tax is 13.3 percent. And Foster sure would be paying it. Last year he signed a $43.5 million[4], five-year deal to stay with the Texans. And ask Mr. Foster about his lucrative endorsement deals.

Here’s California’s version: “Taxing isn’t everything; it’s the only thing.”

(Hat tip to Mike Shelton, my old cartoonist pal from the Register; he wrote something on Foster on Facebook.)