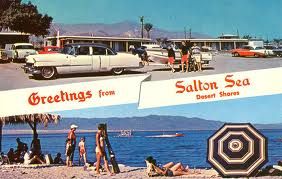 It is being proclaimed that there is a “new normal” of historic low water levels for reservoirs along the Lower Colorado River due to “climate change.” But a closer look beyond the photos of bathtub rings along the banks of Lake Mead[2] reveals the “new normal” is just the old man-made abnormal that is not explainable under California’s “climate change” ideology.  Part of the low water elevation in Lake Mead is because that water was sent to the Salton Sea to dilute its brackish condition.

The August 16 issue of the Christian Science Monitor runs an article, “Colorado River: Is Historic Cut In Water Release the New Normal,”[3] by Michael Cohen of the Pacific Institute in Oakland. He writes, “We’re in an unparalleled — at least in recorded history — period of droughts on the Colorado River system.  It seems that this is the new normal.” He cites “global warming” as the cause of a 14-year drought.

Echoing Cohen, Taylor Hawes of the Nature Conservancy’s Colorado River Program says the U.S. Bureau of Reclamation’s release of only 7.5 million acre-feet of water from Lake Powell “is truly historic.”  Hawes says the Bureau has never released such a small amount of water downstream. The Bureau’s water release followed the 2007 Interim Allocation Agreement between the states in the Upper and the Lower Colorado River Basins.  But is this due to climate change?

A look at the following bar graph of the annual flow of water along the Colorado River, for 100 years from 1905 to 2005, does not corroborate Cohen and Hawes’ apocalyptic prophecies. 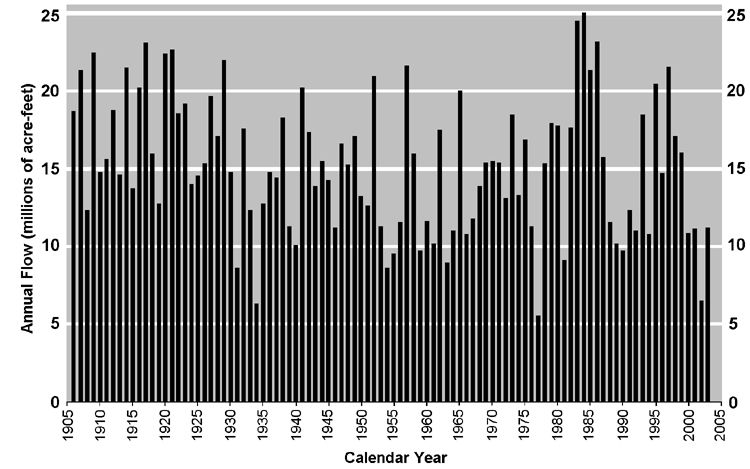 In 1984, the flow reached an all-time recorded high just over 25 MAF. What makes Cohen and Hawes convinced this is any different now and that water flows won’t eventually rebound, forever?

Even Cohen admits that Lake Mead received some 800,000 acre-feet of water in an advance release from Lake Powell last year.  He wrote, “So in some ways, it’s a wash.”  This contradicts his apocalyptic prophecy of climate change. Some of the water was just sent downstream to the Salton Sea.

Climate Change — or Drought and Over-Drafting?

Perhaps a better picture of what is happening can be explained in an article in the May 24, 2013 issue of the Las Vegas Review Journal, “As Lake Mead Shrinks, California Uses More Than Its Share of Water.”[5]

What climate change advocates like Cohen and Hawes fail to mention is that, over the past three years, the Imperial Irrigation District (called IID for short) in California significantly overdrew its Colorado River water allocation.

This means the huge bathtubs of water upstream had to be drawn down. Lake Powell is upstream of Lake Mead[6] in the Lower Colorado River Basin.

Actually, Lake Mead suffered its lowest elevations in the 1950’s and 1960’s before “global warming” became a big issue, as shown in the table below:

A portion of that early release of water also went to dilute the brackish condition of the Salton Sea.  Billions of gallons of river water went to the Salton Sea in 2010, just as Lake Mead was at an all-time low level. The Salton Sea is entirely a man-made inland salt lake created from seepage from the Colorado River Aqueduct and farm water irrigation runoff. Part of the Salton Sea is designated as a National Wildlife Refuge[8].

To put this amount of water into perspective, said Terry Fulp, the Bureau of Reclamation’s Lower Colorado River Basin regional director, “A depletion of this magnitude, without prompt responsive action, has the potential to tip the system into shortage earlier than might otherwise occur, with IID at the focal point of such a destabilizing event.”

The 217,000 acre-feet of water released in advance to the IID is enough to raise the level of Lake Mead by 2 to 3 feet.

The IID will pay back its “water debt” by cutting its deliveries over the next couple of years. The IID actually used less than its normal annual allocation of water in five of the last 10 years, saving 820,000 acre-feet of water.  But the IID has no storage facilities.  If you add the 217,000 acre-feet of overdrafted water and the 800,000 acre-feet of advance water deliveries, that is enough to raise the level of Lake Mead by approximately 14 feet.  The typical annual swing in the elevation of Lake Mead is about 20 feet from winter to summer[9].

Meanwhile, California’s water planners and decision makers are planning on building new reservoirs around the Sacramento Delta, but no water storage in Imperial County.

So the bathtub ring around Lake Mead is mostly man made.  That reflects “new abnormal” policies, not a “new normal” created by climate change.