After months of controversy over the 36 cracked bolts on the new eastern span of the San Francisco/Oakland Bay Bridge, the Toll Bridge Program Oversight Committee made the decision in July to delay the Bay Bridge opening. 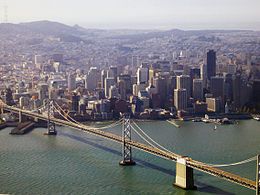 But that decision was tossed and other “officials” voted to adopt a “temporary fix” to the new bridge, to meet the Labor Day opening. We don’t yet know what the “temporary fix” is.

In March, one third of the 96 threaded steel rods cracked as workers tightened them down.

When confronted by reporters in May with the new construction setbacks, Gov. Jerry Brown said, “Don’t know if it’s a setback. I mean, look, s**t happens.”

Will “s**t happen” again? The cracked bolts weren’t the first problem with the new bridge, under construction since the 1989 Loma Prieta earthquake.

The oversight committee is made up of state and local transportation officials. A permanent fix to the bolts will be ready in mid-December.

The bridge oversight committee voted to reestablish the Labor Day opening at a meeting last week. The old Bay Bridge bridge closes at 8 p.m. on Wednesday, August 29 and the new span will open to commuter traffic by 5 a.m. on Tuesday, September 3.

A legacy on the line

With his legacy on the line, Brown is banking on several major infrastructure projects: The $25 billion Delta twin water tunnels, the $68 billion high-speed rail, and the $6.4 billion new eastern span of the San Francisco/Oakland Bay Bridge.

Brown has  been banking on the bridge project since he was Mayor of Oakland, 1999-2007.

Brown has justified the massive infrastructure projects because California “is in a building mood.”

Cost overruns have escalated the total cost to build the bridge to a whopping $6.4 billion, $4 billion over the original estimate.

After the 1989 earthquake, Caltrans decided to retrofit both the eastern and western spans of the bridge. “The 1.8-mile western span retrofit was completed early last year at a cost $471 million — which was $82 million less than originally budgeted,” the San Francisco Examiner reported[2].

However, the eastern span is $4 billion over budget, and a decade behind schedule. But that’s not the only problem.

According to CBS San Francisco[3] in May, retired Bechtel metallurgist Yun Chung prepared an unsolicited 32-page report stating that Caltrans engineers “were ignorant to the threat of hydrogen embrittlement — a process in which high strength metals, such as steel, become brittle and fracture due to hydrogen exposure.” He said Caltrans “fell on its face.”

Caltrans with egg on its face

In May, I wrote a story [4]offering a little history and perspective about the post-Loma Prieta earthquake damage:

Immediately after the Loma Prieta earthquake in 1989, the civil construction bridge building contractor, C.C. Myers [5]of Rancho Cordova, rebuilt two damaged bridges on Highway 1 near Watsonville under budget, and ahead of schedule.

Caltrans allowed only 100 days for completion of the project, and offered Meyers cash incentives to make the project happen under budget, and ahead of schedule. Meyers finished the job 45 days earlier than the Caltrans deadline, and earned $1 million in incentives.

In 1994, the Northridge earthquake in Southern California, 6.7 on the Richter Scale, damaged four bridges on the Santa Monica Freeway in Los Angeles. Myers’ successes with the projects after the Loma Prieta earthquake made his company a natural for this project.

C.C. Myers, Inc. won the contract to replace and replace the freeways with one caveat: the work had to be completed in 140 days. But this was L.A., notorious for congested freeways. The State of California offered Meyers $200,000 per day as a bonus for every day ahead of schedule the project was completed. Meyers’ company finished the job in 66 days, 74 days ahead of schedule, and received a $14.8 million bonus for his outstanding work.

Experts said Myers managed to perform what would have taken Caltrans 18 months of work, in only 66 days.

Matthew Dougherty was just reconfirmed[6] as Caltrans Director, by the Senate in May. It was a controversial decision because it’s been under Dougherty’s watch, with decades of management at Caltrans, many mishaps, corruption, mistakes and cover ups[7], have taken place. Dougherty’s behind is on the line with the re-opening of the Bay Bridge next Tuesday. But more are worried about long-term structural safety, well beyond Tuesday.

Have taxpayers actually purchased the $6.4 billion bridge they were promised, or a structure that will require costly repairs relatively soon?

Caltrans receives failing marks on other projects as well. A January repor[8]t from the California League of Cities , California State Association of Counties and other transportation organizations found only 56 percent of California’s local streets and roads were deemed to be in “good” condition, and 49 of the state’s 58 counties were rated “At Risk” or in “Poor’ condition.