The popularity and success of California’s 900 charter schools aren’t making everyone happy. Union leaders have tried to organize the non-union schools, but unsuccessfully. 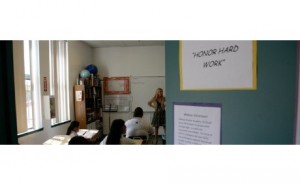 New tactic: Hamper the charters’ spread. AB 917,[2] which just passed both houses of the Legislature, might accomplish that. If it becomes law, it also could be the first volley in a move to severely limit the reform.

Currently, according to the California Department of Education[3], “A charter school is usually created or organized by a group of teachers, parents and community leaders or a community-based organization, and it is usually sponsored by an existing local public school board or county board of education.” Half of the teachers must approve the charter.

AB 917[4] would add a new requirement: one half of all employees in a school — including non-teachers — would be needed to convert a public school to a charter school. These “classified employees” include janitors, accountants, computer technicians, bus drivers, cooks, etc.. That would make it much more difficult to petition for a new charter school. Although such employees are critical to a school’s function, they have no say in the heart of any school, curriculum and teaching.

“Assembly Bill 917 would enable classified employees like you to be a part of the decision making process when a community considers converting a traditional public school into a charter school or starting a new charter school from the ground up,” the SEIU said on its website[6]. “We are deeply committed to the education of our students and know how critical good nutrition, clean classrooms, secure campuses, safe bus rides, and other services are to student learning. Yet, we’re left out of decisions that impact the future of our schools.”

Strangely, AB 917 now is supported by the California Charter Schools Association, which wrote[7], “CCSA supports this bill, which gives greater flexibility to charter school petitioners when seeking signatures. It also allows more opportunity to bring a broader group of stakeholders into support of the charter school and as a part of the school community.”

But the obvious problem for charters is that it will be a lot harder to get signatures from 50 percent of all employees than from just 50 percent of teachers. Moreover, teachers often have spearheaded charters because they seek a school environment free of academic red tape. Such concerns aren’t likely to matter as much, or be as immediate, to a bus driver or accountant.

A decade ago the CCSA was much more a maverick organization. In recent years it has cozied up to the state’s political establishment, even backing last year’s Proposition 30 tax increase.

Critics claim charter schools are unregulated and include some poor performers. But as  Lance Izumi[8], Senior Senior Director in Education Studies for the Pacific Research Institute, has consistently countered, critics always overlook the ability of charter schools to use their freedom in order to transform themselves if they are not performing well.

Charters contrast with today’s education system — the behemoth education bureaucracy cannot and will not make changes to improve what ails it.

If AB 917 is passed, it could hamper the exemplary work charters have performed for poor and minority students. “The Amethod Public Schools, culture and procedures are rooted in traditional values such as discipline, respect, responsibility, work ethic, and community service,” the Oakland Academy High School website [9]reports. “Our mission is to teach inner city students to be different and stand out from their neighborhood peers, many of whom are locked in dismal underperforming schools and subsequently bleak futures.”

This isn’t the first controversial dance over charter schools. The California Federation of Teachers union sponsored AB 401 last year, which would have imposed a cap of 1,450 charters through 2017. However, Gov. Jerry Brown vetoed the bill.

“Charter schools are a small but important part of the California public school system. They vary by size, mission, governing structure and educational philosophy.  Their purpose is to allow parents, teachers and other interested citizens to form public schools outside the more detailed regulatory framework of the regular school system.

“They are profoundly difficult to establish and even more difficult to maintain and grow in excellence. Having started two myself, I know whereof I speak.

“Notwithstanding the important contributions classified staff make to the operation of a school, this bill would unnecessarily complicate an already difficult charter school petition process.

“I believe the existing law is tough enough.”

However, Brown sent a loud message in one of his first acts as governor when he fired seven members of the state board of education who were charter supporters and school reformers.

Yet as mayor of Oakland, Brown also was a major supporter of charters, in particular in the poor areas of the city. As AB 917 now rests on his desk for his signature or veto, the future of charters in California now depends on him.