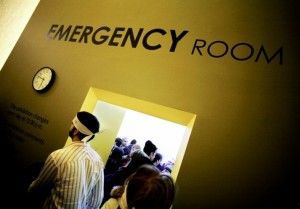 In a victory for taxpayers, a federal judge ruled Wednesday[2] that the City of San Bernardino is eligible to file for bankruptcy. That trumped the claims of the California Public Employees Pension System that the court had the paramount right to force the city to raise taxes to fund pensions.

This the first municipal bankruptcy domino to fall in California after the 2008 financial crash that tested which law was paramount: Federal bankruptcy law or the California Constitution that guarantees public retirees a defined pension benefit.

City Attorney Jim Penman penned a letter that was read aloud in the courtroom. The letter succinctly summed up the city’s financial insolvency issue, “It’s an emergency room, not a health spa.”

U.S. District Judge Meredith Jury ruled that it was clear the city was broke and that bankruptcy was the only option for financial survival of city government.  Jury said, “I can’t see anything other than dissolving the city if they can’t file under Chapter 9” of the federal bankruptcy law. “The city deserves a chance.”

CalPERS had accused the city of hiding funds and filing for bankruptcy as a delay tactic to postpone payments into the CalPERS pension fund.  Michael Gerin, legal counsel for CalPERS, accurately summed up the direness of the ruling for CalPERS, saying it would “set a dangerous precedent.”  However, the judge’s decision is hardly a precedent when other municipal bankruptcy cases in Vallejo and Orange County preceded the judge’s decision[3]. In both those cases, federal bankruptcy courts sorted out matters.

CalPERS’ attorney also warned that the city was likely to game bankruptcy as a way to avoid paying creditors.

But Penman, the city attorney, retorted that bankruptcy is an “extremely painful process” for the city and to “suggest any city would subject itself to the process unless it had to is simply disingenuous.”

The city must now proceed to pound out what is called an “adjustment plan” with the help of the court-appointed mediator, Judge Gregg Zive of the Federal Bankruptcy Court in Reno, Nevada.  San Bernardino has 200 creditors, some of which supported the bankruptcy option, such as Wells Fargo Bank and Ambac Assurance Company.  If the decision had been that San Bernardino was not eligible for bankruptcy, CalPERS could have filed a lien on city assets under state law.  CalPERS is owed some $13 million in arrears in pension payments that are still mounting.

A year ago, Moody’s credit rating service warned of a “mass of municipal bankruptcies.”[4]   Moody’s specifically cited the San Bernardino bankruptcy case and said the greatest share of municipal bankruptcies would come from California.  Moody’s pointed out that about 10 percent of California’s 482 cities had declared a fiscal crisis.  USA Today[5] listed Atwater, Azusa, Compton, Fresno, Hercules, Monrovia, Oakland, San Jose and Vernon as vulnerable to bankruptcy.

Despite Gov. Jerry Brown’s triumphant declaration of a recovery of the state’s finances, there is a denial that the state could also be insolvent in the future if it faces up to its proverbial “wall of debt,” estimated at $1.26 trillion.  [6]

Next comes an inevitable court appeal on the way to financial surgery without anesthesia for CalPERS.