A couple of days ago in this article[1] I debated come commentators about cop SWAT teams. I pointed out how they commonly were abused, and we’d be better off without them. 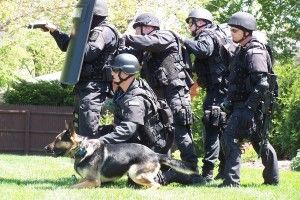 [2]This new story comes from Charlottesville, Virginia, the home of the University of Virginia, which was established by that great civil libertarian, Thomas Jefferson. Two college girls went to buy bottled water. The SWAT team thought they were buying beer — horrors! — and swooped down[3]:

“The seven agents surrounded the terrified girls’ car; one of them pulled a gun, others attempted to break the windows.”

What a horror. And it was as recently as the 1970s that the drinking age in many states, including the Michigan I grew up in, was dropped to 18. Yet this Zomo [4]SWAT team assaulted these poor girls. Well, at least the girls got an education they never would have gotten from UVA: they know America is a police state.

“According to an analysis conducted by The Baltimore Sun of SWAT team raids in Maryland (the only state to have passed a law requiring accountability regarding SWAT team activities) during a six-month period in 2009, raids involving emergency situations, such as hostage-taking and bank robberies, comprised a mere six percent of SWAT team assaults.”

That’s it: 6 percent. Which means the other 94 percent were for such things as assaulting 19-year-old girls buying bottled water.

It’s obviously a case of bureaucratic bloat. All bureaucracies seek to expand relentlessly. In the private sector, bureaucracies are kept in check by competition; if they get to big, they kill profits and the company goes broke.

In the government, sector, there’s no such check. If they need more money, taxes are raised. In the case of police departments, their bureaucracies also benefit from the largesse of federal programs to “help” local police by giving them military equipment. For example, from the National Institute of (In)Justice website:

Actually, there is a check on this waste: The federal government has run up a $222 trillion [6](with a “t”) tab of unfunded liabilities. So the Swats Gone Wild mindset soon will be checked like a college girl whose Spring Break was cut short by her parents canceling her credit card.

That will mean canceling federal funding for local SWAT teams. And with local budgets also under fire, the SWAT teams soon will be curtailed, even eliminated, in favor of old-fashioned policing.

And fewer SWAT teams will mean, maybe, coeds can go buy bottles of water without being assaulted.