When Debra Bowen was a candidate for California secretary of state in 2006, two of her top three priorities, according to SmartVoter.org[1], were to: 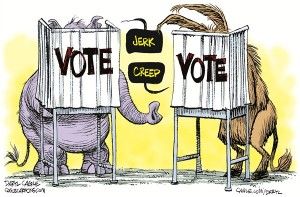 [2]Bowen, a Democrat who narrowly defeated Republican Bruce McPherson in 2006 and won an easy re-election in 2010, has fallen short in achieving those top priorities, according to a recent state audit[3]. In addition, Bowen has wasted more than $22 million in federal funds from the Help America Vote Act of 2002[4], according to the report by California State Auditor[5] Elaine Howle.

The audit, “Office of the Secretary of State: It Must Do More to Ensure Funds Provided Under the Federal Help America Vote Act Are Spent Effectively,” details years of mismanagement by Bowen’s office in the administration of California’s voting systems. Bowen’s response to the audit places much of the blame on unrealistic federal regulations.

According to the audit:

The waste of more than $22 million resulted from Bowen and other secretaries of state “reaching different conclusions as to whether particular direct recording electronic voting systems — such as computer-based push-button or touch screen systems — were suitable for use in California,” the audit said. “As a result, some counties that used HAVA funds to buy certain voting systems subsequently found that they could no longer use these systems or could use them only with significant restrictions.”

Bowen’s response to the audit chides Howle for failing to note that the problem with direct recording electronic voting systems existed nationwide, with many states banning the machines after “many computer scientists proved [them] to be vulnerable to tampering and inaccurate vote tallying.”

Bowen blames the federal government for requiring that new voting systems be in place (replacing paper punch cards with their notorious hanging chads) by 2006, but not issuing new voting standards until December 2005, “after many jurisdictions had already purchased inferior early model systems to meet the January 1, 2006 deadline.” Those jurisdictions included several California counties who were either unaware or ignored the fact that “[s]tate officials continued to be appropriately skeptical about DRE voting systems.”

Bowen said she then carried out legislative direction to conduct an in-depth review that revealed that DRE systems “could be exploited to change election results” and that “electronic systems that optically scanned paper ballots proved to be much more reliable. … It is truly unfortunate that the U.S. Congress foisted poorly constructed DRE voting systems onto governments and the voting public without first establishing high security, accuracy and reliability standards for these systems to meet.”

But the case against DRE machines may not be as conclusive as Bowen asserts. In February 2006, her predecessor, McPherson, approved a DRE voting system based on the fact that the vendor had received federal certification, the system was being used in 19 states and UC Berkeley computer scientists investigated the system and found that, while some problems did exist, they were manageable, and any risks could be mitigated by counties following appropriate use procedures, according to the audit.

So, Bowen’s ban on the machines may have been unnecessary, costing taxpayers the $51 million for unusable machines.

“Adding to the problem, there appears to be a lack of clarity for the counties buying voting systems, the manufacturers who make them, and the general public as to what California’s expectations are for its voting systems and what standards are being applied as part of the secretary of state’s process for voting system approval,” the audit states.

As a result, despite California’s counties having received a total of $252 million since 2003 to replace their voting systems, nearly a fifth of the state’s counties indicated that they are currently using aging voting systems. And nine indicated that they need additional funding to upgrade them, four of them having exhausted their funds for voting-system replacement.

Bowen’s office “has chosen not to declare its compliance because it has yet to successfully deploy a new statewide computerized voter registration list called VoteCal,” the audit states. “[T]he lack of a fully deployed VoteCal system should not prevent it from declaring the State’s compliance with HAVA …. Doing so would enable the Legislature to determine how best to use the remaining HAVA funds.”

Bowen responded that the implementation of the VoteCal system is necessary in order to fully comply with HAVA. “California taxpayers could end up footing more of the bill if the Legislature and Governor spend these limited federal funds before knowing the true costs of maintaining and operating VoteCal,” her response states.

But Howle countered that Bowen could renegotiate the agreement with the U.S. Justice Department to implement VoteCal. In any case, an official in Bowen’s office confirmed that the terms of that agreement with Justice “do not prohibit the State from declaring compliance with HAVA,” the report states.

In Bowen’s defense, she’s actually following in the footsteps of the last Democratic California secretary of state, Kevin Shelley. In 2004 an audit found that Kevin Shelley poorly managed the $81 million in HAVA funds he received, failing to spend nearly $35 million of it for the replacement of outdated voting machines in the time allotted by the grant, according to the San Francisco Business Times[9].

Also in Bowen’s defense, she has followed through on her third top priority when she was running for office in 2006: “Improve disclosure of campaign contributions to candidates and ballot initiatives so people can easily track how the money flows in politics.” Last week, nearly seven years after winning election, Bowen announced[10] that she is now providing raw campaign finance data online that was formerly only available on CD-ROM or paper.