Many reporters end up working for government

Who holds government accountable? We the People[1] rely on the media. But the line between government and journalism has grown fuzzy. 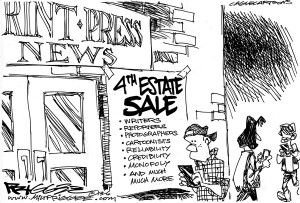 “Frantz, who had previously spent more than three decades at publications such as The New York Times and the Los Angeles Times, returned to journalism in May 2012 as The Washington Post’s national security editor,” the Standard reported[4].

It would be interesting go back through Frantz’s stories and see if there was a detectable political agenda in his reporting while he was priming for his job at the State Department. It’s difficult not to discount much of what he wrote prior to joining the Kerry staff.

The Society of Professional Journalists Code of Ethics [5]specifically says:

“Journalists should be free of obligation to any interest other than the public’s right to know.

“* Remain free of associations and activities that may compromise integrity or damage credibility.

“* Be vigilant and courageous about holding those with power accountable.”

The line is blurred

The line between journalism and political activism has become blurred. This might be startling news if it wasn’t the norm. With the recent history of media layoffs and downsizing, journalists leave newspapers and television stations in droves these days… for the comfort of government.

How can a journalist hold government, agencies and politicians accountable if he’s got his eye on a job working for the politician or government agency?

Are they acting as mere government functionaries? This could explain how the American media have largely abandoned the mission “to seek the truth and report it,” and “distinguish between advocacy and news reporting.”

In California’s capitol, I have counted more than 40 former news reporters, television reporters and radio newscasters who now work inside the state Capitol, or for a state agency.

The most recent defection from the Capitol press corps is Steve Harmon, former news reporter for the Contra Costa Times. Harmon was recently hired as the communications director for Assemblywoman Nora Campos, D-San Jose, Speaker pro Tempore of the Assembly.

But Harmon is not alone. There are at least 30 other former reporters who have recently worked or still work inside the Capitol.

Vogel now works for the Department of Water Resources[7] as the Director of Public Affairs.

Philip J. Trounstine, a former San Jose Mercury News reporter, was hired by Democratic Gov. Gray Davis as communications director, then went back to journalism as co-publisher and co-editor of political blog Calbuzz.com.

Kate Folmar was a Capitol Bureau reporter for the San Jose Mercury News and the MediaNews Group newspaper company, then was hired as U.S. Senator Barbara Boxer’s press secretary. Folmar next worked as the political communications coordinator for the California Democratic Party, and served as spokeswoman for Secretary of State Debra Bowen, a Democrat.

Max Vanzi, former Los Angeles Times reporter, was hired by the California State Senate Office of Research[8]. [Note: The spelling of Vanzi’s first name was corrected from an earlier version.]

UPDATE:  John Adkisson of the Senate office called with a correction in this article. He said Mark Arax never went to work for the Senate Office of Oversight and Outcomes.

In 2009, Arax sent out an announcement[9] that he was going to work as a Senior Policy Director for Sen. Dean Flores, doing investigative and research work. “I will continue to do what I’ve been doing all my adult life: search out the nooks and crannies of California and find the hidden stories about our institutions, our farmers and farm workers, our food safety and air quality,” Arax said. “Instead of reporting to newspaper readers, I’ll be reporting to the political leaders of the Senate majority. I’m looking forward to working with Senator Florez and Senator Steinberg, two Valley boys like me, and their fine staffs.  I see it as another great avenue to bring about important change.”