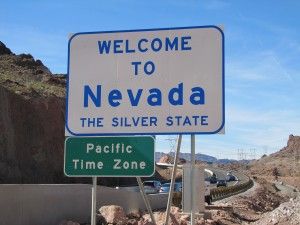 [1]Taxes have consequences. That’s something tax increasers don’t understand. Remember how Gov. Jerry Brown and others campaigned last year for Prop. 30, saying millionaires had to “pay their fair share” (even though “millionaire” was defined, in California math, as someone making $250,000 a year)? But they insisted the tax increase would not drive people out. Wrong.

The reality, from Joel Fox[2]:

Anecdotal, yes, but a news report indicates that warnings made during the Prop 30 campaign last year are playing out — higher taxes are sending some Californians across the state line to Nevada.

Under the headline, California Rich Seek Nevada Tax Haven, in the Tahoe Daily Tribune, the article says that Californians accounted for 43 percent of the 288 sales so far this year in Incline Village and Crystal Bay. More to the point, an Incline Village real estate broker reports that of the 39 sales on Nevada shores of Lake Tahoe to Californians since the beginning of the year, 15 buyers, forty percent of the total, specifically said they moved to Nevada to escape the Prop. 30 tax hikes.

Other brokers confirmed that there has been an increase in high-end housing sales that the reporter wrote was attributed to California residents’ “desire to get beyond the reach of the Golden State taxman.” Sales on the Nevada side of Lake Tahoe were stronger than on the California side with a broker quoted as saying, “Prop. 30 probably has something to do with that.”

Some would argue the numbers reflected in the article are not significant. However, since the California tax system is built something like an upside down pyramid with the few at the bottom holding up the structure, a small but significant stream of high end taxpayers moving to low tax states could have consequences on California’s bottom line.

I hope so. I hope tax collections plunge sharply so the taxpayers get to keep more of their money and the state’s finances implode faster. The faster that happens, the faster we can enact reforms.

Perhaps more troubling was the note in the article about “California entrepreneurs, many of them owners of mid-sized companies in the Central Valley, who want to move their companies lock-stock-and-barrel to Nevada.”

According to the report, the business owners want to keep their companies close while at the same time protecting themselves from the taxman.

Many of these firms are S Corporations, which pay taxes at the high 53 percent California level, same as for persons. By moving to Nevada, their company also gets a 25 percent tax cut.

Here’s a slogan: “California. It’s a place to leave.”