Californians are starting to pay for the cost of the state's Draconian environmental laws. 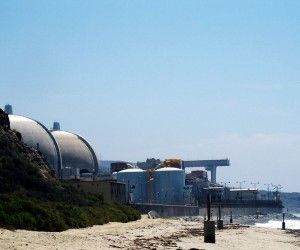 [1]Wholesale electricity market prices spiked about 70 percent over last year.  So reports the Independent System Operator [2]that manages California’s electric transmission and distribution line grids.  The reasons given by the ISO are:

Some experts believe that 2012’s low natural gas prices were due to the increase in supply created from hydraulic fracturing or “fracking.”[3]  But others believe the reason that natural gas prices have risen so high in 2013 is the Obama administration’s mandate to shut down coal-fired power plants[4] and shift to natural-gas-fueled power plants. The electricity price discount from fracking is being wiped out by the shift from coal power to natural-gas-fired power plants.

Cap and trade accounts for nearly all of the other half of the increase in natural gas prices in the second quarter of 2013.

Cap and trade[5] is a policy whereby excess polluters have to pay the California Air Resources Board to buy permits to pollute over a certain emissions cap.  The ISO reports that forward purchases in the wholesale electricity market in the second quarter of 2013 were about $6 per megawatt hour higher due to the implementation of the program.  That reflects about 15 percent of the wholesale price of electricity. The ISO report states the higher natural gas price is “highly consistent with the additional emissions costs for gas units typically setting prices in the ISO market.”

Another consequence of the heightened demand for natural gas reported by the ISO is that imports of electricity have not decreased due to the cap-and-trade program.

The ISO report states that both “cleared imports and import bid quantities increased in the first half of 2013 compared to the first half of 2012 by 7 and 13 percent, respectively.”  So California’s plan to wean itself from dependence on imported power is backfiring as a result of cap and trade.

California imports about 25 percent of its electricity from out of state. But these imports are responsible for roughly half of the greenhouse gas emissions[6] from power providers.  CARB suspended its “anti-shuffling”[7] rule in 2012 that required importers to send only low emission power into the state.

Cap and trade wiping out gains from green power

Of possibly greater concern to environmentalists is that the combined effects of mothballing coal power plants outside of California and California’s cap-and-trade program reportedly ate up a $5 per megawatt price decrease from wind and solar power during peak hours during early 2013.

Back to 2001 in Southern California

The average customer, not knowing where the price hike is coming from, may be likely to blame greedy oil and gas companies.  But Californians have been persuaded that they want clean air. The price for that is just starting to show up in customer’s electricity and gas bills.