Sea of grimy mattresses evidence of need for recycling bill

A sea of used mattresses was on display at a press conference on the steps of the Capitol Wednesday. The stained, lumpy mattresses were a grimy but convincing prop for a bill which would create a recovery and recycling program for used and unwanted mattresses.

But the bill proposes a new fee on mattress purchases in order to fund the recycling program. This new tax has many in the Capitol opposed to the bill. But is this actually a good solution to a growing problem?

There is currently no law addressing the problem of illegally dumped mattresses. 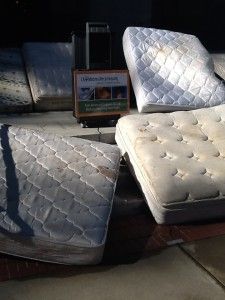 SB 254 [2]by Sen. Loni Hancock, D-Berkeley, and Sen. Lou Correa, D-Santa Ana, would mandate mattress manufacturers to pay the entire cost of mattress recycling — a cost which would undoubtedly be tacked on to the price of a new mattress. It has already been passed by the Senate, and will be in the Assembly next week.

Mattress manufacturers are on board with the program.

“Illegally dumped mattresses are a terrible blight on our communities,”  Hancock said.  “They not only deface a neighborhood but they can become a health hazard and a breeding ground for mold and pests. This instantly tips over into a blighted neighborhood.”

Hancock has fought for this bill for several years, but only recently gained more supporters with the addition of Sen. Correa on the bill as co-author.

A similar bill introduced by Hancock last year passed the State Assembly but died on the Senate floor as the 2012 legislative session ended.

Mattress manufacturers chose to get out in front of the problem rather than wait to be regulated without any input. Most feel SB 254 [3]could be a win-win, without actually costing Californians much more at checkout.

In an interview in April with Christopher Hudgins, with the International Sleep Products Association[4], he said there are several issues with old mattresses, besides the unsightly abandoned mattress street litter in some areas of the state. Faced with Hancock’s bill and a potential mandate, his association worked up an alternative solution.

There is an economic concern: cash-strapped cities are forced to spend hundreds of thousands of dollars collecting and disposing of abandoned mattresses using the city waste management programs. “That’s money that could be better spent on police and other vital services for the community,” Hancock said.

SB 254 would require mattress manufacturers to submit a recovery and recycling plan to CalRecycle [5]by April 1, 2015. Consistent with existing state policy, the plans would have a goal of recycling at least 75 percent of used mattresses in California by January 1, 2020.

The program would be financed by a point-of-sale fee upon the purchase of a new mattress.  The fee collected does not go into the general fund;  it would be remitted directly to the non-governmental group responsible for sustaining the mattress recycling program.

Recyclers are also on board with SB 254 and say this program will help increase recycling programs and create jobs. There are currently eight locations which recycle mattresses in California. While the current process to dismantle and turn used mattresses into raw materials for reuse is arduous, this is part of the reason a fee is needed to offset these costs.

Supporters of SB 254[6] believe as the recycling law is implemented, and the financial incentive is created, more recycling centers will open. Some will become more automated than others, supporters claim this will create jobs, while removing the burden of having used mattresses in our landfills, and diminishing the illegal dumping of used mattresses.

Hancock and Correa assured skeptics the fee will be kept as low as possible — “It’s a win-win-win bill.”