Californians are used to suffering the consequences from state laws drafted by unions and forced through by their allies/puppets in the state Legislature. But now we see the same phenomenon afflicting the Golden State thanks to a union payoff made by Congress — in 1964! 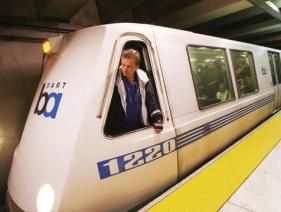 “LOS ANGELES (AP) — Under a carefully orchestrated deal, California would again receive billions of dollars of mass transit funds that the federal government was withholding amid a dispute over cuts to public employee pension benefits.

“As a result, transportation systems across the state no longer face service cuts and the prospect of abandoning planned light rail, subway and other construction projects.

“The deal, announced Wednesday by the state’s top Democrats as part of new legislation, temporarily exempts workers at public transit agencies from a 2012 California law that required public employees to contribute more to their retirement funds.”

So what’s going on here? Prepared to be aggravated, at least if you support pension reform. I wrote about it last month[1].

“In 1963, President John F. Kennedy and many in Congress were keen on using federal funds to improve decaying mass-transit systems in urban areas. But transit unions, worried about the sharp decline in transit jobs after World War II, were strongly opposed. According to an analysis commissioned by the Federal Transit Association, the workers feared that automated, driverless cars and buses could wipe out scores of jobs, and that the federal effort might lead to government takeovers of private transit firms and an abrogation of their workers’ collectively bargained contracts.

“To win union support, Kennedy, Congress and Lyndon B. Johnson, Kennedy’s successor, agreed to include protections for transit workers in what became the Urban Mass Transportation Act of 1964. The most significant: Federal transit funds shall not go to governments that have not preserved the ‘rights, privileges and benefits under existing collective bargaining agreements’ of all transit workers in the area where the funds are to be spent.”

A hangover from a different era in the U.S.

In perpetuity, according to the Obama administration. Sheesh. More from my grousing last month. 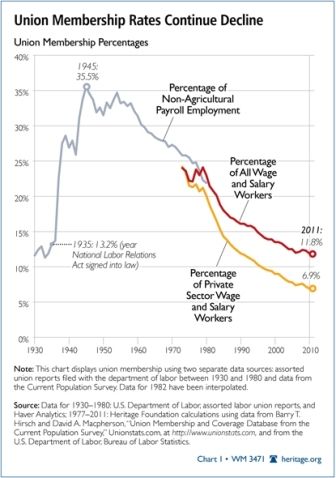 “This is preposterous. A 1964 legal provision addressing concerns that may have been valid then but are now moot has morphed into a powerful protection for the pensions of all mass-transit workers — even those not yet hired. …  Congress and the Obama administration must revise the 1964 law. Local and state governments everywhere are reeling from pension costs. They should not face federal threats of any kind for trying to address their problems — especially threats mandated by a 49-year-old political payoff to unions.”

Nowadays the most powerful unions are government unions, especially teachers unions. In 2009, the U.S. passed a milestone of sorts when a majority of U.S. union members were government employees for the first time[2].

But in the old days, private unions had vast clout. And now, many decades later, California taxpayers will suffer as a result.

And the unions that benefit? As far as I can tell, they’re all government transit unions.