SACRAMENTO — Imagine you miss work for five consecutive days and don’t call your supervisor to explain why. You probably wouldn’t have a job for very long.

But employment conditions in state government are very different, and about to get more so. 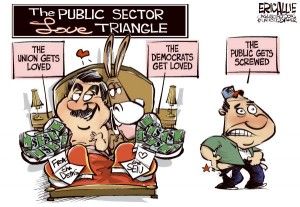 Thirty-eight members of the State Assembly voted Friday to support a bill to allow state employees to miss five consecutive days of work, and still be able to keep their jobs.

Sponsored by the Service Employees International Union, Assembly Bill 855 is [2]by Assemblywoman Cheryl Brown, D-San Bernardino. It would require the California Department of Human Resources [3]to reinstate the AWOL worker if “automatic resignation” kicks in if the employee is absent from work without permission for five consecutive work days.

Being AWOL means “absent without official leave.” In the military, AWOL is also known as “desertion.” Current law allows the state to terminate an employee for being AWOL for five consecutive days, under the assumption of an “automatic resignation” clause.

“The SEIU is trying to circumvent the collective bargaining process,” said Assemblyman Brian Jones, R-Santee, during Friday Assembly session, which I attended. “They should bring it to the bargaining table — it’s between the union and the state.”

Jones said this bill demonstrates to the rest of the country just how out-of-touch the California Legislature is. “How can anyone think this is good?”

Even Assembly Speaker John Perez questioned the purpose of the bill. “What are you trying to correct,” Perez, D-Los Angeles, asked Assemblywoman Brown. Even after Brown explained that administrative law decisions to terminate AWOL state employees have never been overturned, Perez wasn’t convinced. “I still don’t get the defense of what the deficiency is,” he said. Perez asked Brown to specifically address this in her closing argument.

“Would you extend provisions of this bill to the California State Assembly so we may be AWOL for four days without getting fired, or having the California Highway Patrol coming after us?” quipped Assemblyman Tim Donnelly, R-Hesperia.

“I think we are not under the same rules,” Brown replied. A silence descended over the Assembly momentarily.

“Taxpayers are frustrated when we don’t play by the same rules,” Donnelly said. “If anyone here were to skip session, the Speaker has absolute authority to send the CHP to get us. State employees should be under the same rules.”

Assemblywoman Shannon Grove, R-Bakersfield, asked Brown if a state employee would be only allowed five consecutive AWOL days during the year, or could take five days off without permission from a supervisor one month, and then do it again, month after month. Grove said the way the bill was written, it would allow bad employees to abuse the intent, without recourse by the state.

“To quote, ‘we are not under the same rules.’ I applaud the author’s honesty,”  Assemblyman Don Wagner, R-Irvine, said. “Occasionally on the floor, the truth slips out.”

Brown’s bill [4]would require the state to reinstate the employee if “the employee makes a satisfactory explanation as to the cause of his or her absence, and his or her failure to obtain leave.”

The second condition for reinstatement is “if the department finds that the employee is ready, able, and willing to resume the discharge of the duties of his or her position or, if not, that he or she has obtained the consent of his or her appointing power to a leave of absence to commence upon reinstatement.”

The bill is currently stalled in the Assembly on a 38-27 vote, with many Assembly members not voting at all. But it will only take three more votes to pass. With the SEIU pressing Democrats to vote for the bill, expect AB855[5] to pass.