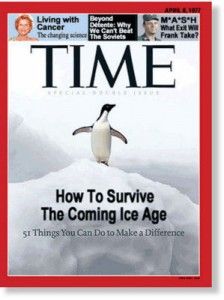 [1]Remember Al Gore’s 2006 “An Convenient Truth[2]?” phony documentary? It showed Arctic ice melting and crashing into the ocean. It garnered Al an Academy Award, a Nobel Peace Prize — and greatly increased his own personal wealth.

It was part of the “global warming” hysteria of the day, including California’s passage of Arnold Schwarzenegger’s AB 32, the Global Warming Solutions Act of 2006, which has been shutting down our “dirty” industries.

This just in from the London Telegraph[3]:

There has been a 60 per cent increase in the amount of ocean covered with ice compared to this time last year, they equivalent of almost a million square miles.

In a rebound from 2012’s record low an unbroken ice sheet more than half the size of Europe already stretches from the Canadian islands to Russia’s northern shores, days before the annual re-freeze is even set to begin.

The Northwest Passage from the Atlantic to the Pacific has remained blocked by pack-ice all year, forcing some ships to change their routes.

A leaked report to the UN Intergovernmental Panel on Climate Change (IPCC) seen by the Mail on Sunday[4], has led some scientists to claim that the world is heading for a period of cooling that will not end until the middle of this century.

If correct, it would contradict computer forecasts of imminent catastrophic warming. The news comes several years after the BBC predicted that the arctic would be ice-free by 2013.

Appropriately, the Orwellian BBC was the model for the Ministry of Truth[5] in Orwell’s 1984. 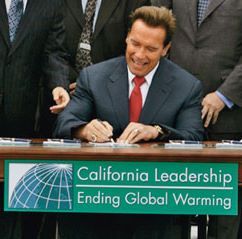 [6]Yet Gov. Jerry Brown keeps insisting that global warning is threatening us:

“If you take a look at Google and type in ‘global warming news,’ I venture to say on most days in the news, 20 to 30 percent, if not more, of the news, will be by climate deniers or skeptics, whatever you want to call them,” Brown said at a conference with climate scientists[7] at NASA’s Ames Research Center. “Everything these guys are saying either is not true, not relevant or totally distorted — or it’s not important.”

The Democratic governor, who has made climate change a focus of his administration, compared interest in the event to recent news that the Bay Area[8] will host football’s Super Bowl[9] in 2016.

“I mean, compared to getting the 50th Super Bowl,[10] this stuff is silly,” Brown said. “It’s just a bunch of scientists talking. What really counts is the stuff you’re going to read on the front page tomorrow. You’re not going to hear about this. It’s not allowed, because this is not news. News is something else. This may be true, it may be fundamentally important, but it’s not news and therefore it cannot be printed in the American press.”

The whole “global warming”/”climate change” scam was just to increase the power of the government and the wealth of people like Gore.

Now it’s becoming obvious that the opposite is happening. Turn on that electric blanket.