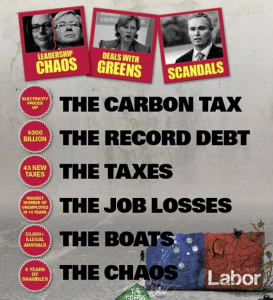 Gone from office is Prime Minister Julia Gillard, who was replaced as Labor Party Leader by Rudd. Gillard left extremely unpopular because, among other policies, she had imposed the carbon tax. She also was working with California environmental officials.

The landslide victor, Abbott, commonly is referred to as “pugnacious.[2]” He promised to curb Gillard's more restrictive environmental policies, which have damaged the country's recent mining boom. As the anti-Labor Party poster nearby shows a major Abbott plan was getting rid of Gillard's carbon tax.

Abbott proclaimed, “Australia is once more open for business.”

When elected six years ago, Gillard promised voters[3] she would not impose an economy-wide carbon tax on the country. Then she reneged on that pledge, imposing it on July 1, 2012[4]. According to the Carbon Tax Facts website[5], which backs the tax:

“At the centre of the government’s policy on climate change is pricing carbon. Many commentators and politicians have referred to this as a 'carbon tax.' The idea is that polluters will pay per tonne of carbon they release into the atmosphere. This cost will initially be set at $23, and increase gradually until 2015, when we will shift to a trading scheme that will let the market set the cost. This is widely thought of as the most effective and least costly mechanism to reduce carbon output and reduce the level of climate change that is occurring.”

But Gillard's reneging on her pledge riled Aussie opposition.  Two grassroots organizations, The Carbon Sense Coalition and the No Carbon Tax/Climate Skeptics Party, took on her Labor Party.  Then several large Australian businesses and the country’s second largest airline, Virgin Australia[6], posted losses for the year, blaming her carbon tax.

Just this past summer, Gillard's government was working with California on carbon trade implementation. Reported Reuters[7]:

“California and Australia on Tuesday agreed to share information on the design and implementation of their carbon markets, a move that could help pave the way for an eventual link between the two jurisdictions.

“The two partners agreed to share technical expertise on market design, administering allowance auctions, and implementing carbon offset schemes, while also discussing how to link their markets in the future.”

Abbott promised a distinctly different environmental program from Gillard. He pledged to dump the carbon tax [8]and end any thought of entering into an emissions trading or carbon credit auction scheme.

In addition, Abbott pledged to promote the use of domestic oil, natural gas and coal, as well as developing nuclear energy for Australia. And he promised to impose tougher environmental standards for wind energy plants; and to address noise pollution complaints from residents living near the nation’s giant wind farms.

Abbott is a former Rhodes Scholar, seminarian and one-time manager of a cement plant, one of the industries hardest hit by the carbon tax.

“Aside from a swathe of overwhelmingly negative effects to our way of life and the environment[9] if we do not make a global effort to fight climate change, there are significant risks to the Australian economy if we do not take steps towards pricing carbon. John Birmingham of the Sydney Morning Herald published an illuminating article[10] detailing how we will end up paying whether or not a price on carbon is introduced. The difference is to who that money will go – to Australian taxpayers in the form of compensation, or to overseas jurisdictions in the form of penalty payments. [-][11]

“To illustrate the risks facing us if we do not act, let’s consider the case of Qantas, who now faces an initial carbon tax penalty of 15%[12] on its carbon emissions for any flights it makes into or out of Europe. This penalty will increase over time, and is payed directly into the coffers of the European Union. The reason for its imposition is specifically because Australian does not have carbon price in place.”

But voters weren't convinced the threat was so serious, and backed Abbott.

Get Your Ex Girlfriend Back Text[13]

Warren Duffy, president of Friends for Saving California Jobs, is an award-winning talk show host, columnist and author.  His recent book is “The Green Tsunami-A Tidal Wave of Eco-Babble Drowning Us All.[14]”