SACRAMENTO — The California Legislature ended the 2013 legislative session Thursday by passing hundreds of new bills. Most of the controversial bills were passed along party lines. However a bill from Sen. Pres. Pro Tem Darrell Steinberg, D-Sacramento, granting a Sacramento arena development an exemption from the state’s strict environmental laws, had plenty of help from state Republicans. 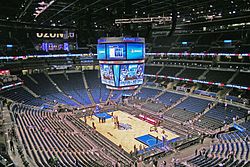 SB 743[3], is a gut-and-amend bill by Steinberg is titled, “Environmental quality: transit oriented infill projects, judicial review streamlining for environmental leadership development projects, and entertainment and sports center in the City of Sacramento.”

That’s the long way of saying this is not really a CEQA reform bill. It’s a face-saving way out for Steinberg who has been awkwardly intertwined for more than 13 years with the haphazard development of a new sports arena in downtown Sacramento.

On its way to the Gov

This isn’t a one-off bill. Exemptions from the California Environmental Quality Act[2] were granted a couple of years ago for a proposed stadium in downtown Los Angeles for a pro football team, and for a new stadium for the San Francisco 49ers in Santa Clara.

But Steinberg’s bill [4]has so much more in it, which have nothing to do with reforming environmental laws:

Only one Republican in the Senate voted against SB 743: Sen. Joel Anderson, R-San Diego.

I told ya so

After Sacramento officials accelerated approval on this latest arena deal in March, I contacted Senate President Pro Tem Darrell Steinberg, D-Sacramento, and asked if he planned on authoring legislation to streamline or bypass the required environmental process for the proposed Sacramento arena. Steinberg’s office denied any plan for a CEQA exemption. However, in order to shoehorn the publicly subsidized arena into downtown Sacramento, this had to be in the cards.

California’s absurdly strict environmental guidelines and restrictions prevent most large scale projects from ever taking place without legislative intervention. But instead of choosing certain projects for exemption, the California Legislature made noise about the need for CEQA reforms, but thus far, has killed any sincere attempts at real reform.

He introduced SB 731 and said it would “accelerate the pace at which a Downtown Sacramento sports and entertainment complex would proceed through the environmental planning process.”

Sacramento has spent 13 years trying to build a publicly funded sports arena. And Steinberg has been involved every step of the way.

“Many say given how Sacramento officials have already rammed through the term sheet approval in record time, they will also try to ram the development process through, without giving residents and businesses the standard allotted time to question the process and project,” I wrote March 30[7].

What could Steinberg have used to sweetened the pot for Republicans in order to garner some of their votes for passage of SB 743? No one is talking… yet.