A Republican state lawmaker who routinely decries “lawsuit abuse” and “feeding trial lawyers” has filed a $10 million civil lawsuit[1] against a fellow state lawmaker for intentional infliction of emotional distress. 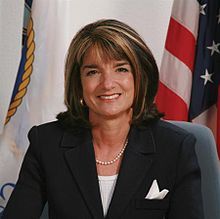 [2]Assemblywoman Diane Harkey, R-Dana Point, is suing state Sen. Mark Wyland, R- San Diego, for defamation, presenting her in a false light and intentional infliction of emotional distress, according to court records first obtained by SDRostra.com[3]. Harkey says that Wyland’s statements at a summer Tea Party event exposed her to “hatred, contempt, ridicule” and even caused her to seek “medical treatment on a number of occasions.”

Wyland allegedly alluded to Harkey’s ongoing financial and legal troubles surrounding the bankruptcy of Point Center Financial Inc., a company that is controlled by her husband, Dan. The Orange County assemblywoman has reported the company on her financial disclosure forms[4] filed with the state’s Fair Political Practices Commission.

Disgruntled investors say that Dan Harkey made ill-advised loans and pocketed additional fees from the company. In July, a jury “found Dan Harkey and his company liable for $9 million to investors,” according to the Los Angeles Times[5].

The week of the jury verdict, Wyland allegedly made the following statements that were apparently so hateful they forced Harkey to seek medical treatment:

“Unfortunately, there has been a lawsuit brought by a lot of investors of modest means against her and her husband for defrauding them. … There was decision that those investors were defrauded and there is a judgment.”

While Harkey has filed a $10 million lawsuit against Wyland for allegedly misstating facts, her own complaint gets some simple facts wrong. Harkey’s complaint refers to “the public office for which she seeking as a Member of the Franchise Tax Board.” That’s factually incorrect. Not only is Harkey seeking a position on the state Board of Equalization, but members of the Franchise Tax Board are not elected at all.

As a member of the Legislature, Harkey has repeatedly criticized lawsuit abuse. Earlier this month, Harkey opposed SB131[6], a measure to allow victims of sexual abuse to bring civil lawsuits against private organizations that harbored abusers, which the Legislature just passed.

“It ought not to be just about reopening wounds and feeding trial attorneys,” Harkey said in a floor speech against[7] the bill.

Harkey, according to her legislative website[8], has also introduced legislation that “prevents lawsuit abuse and protects our state and local municipalities.” She has also criticized the state’s payment[9] of interest on legal settlements because it “often times merely serves to fund the next lawsuit against small businesses and California employers.”

Harkey’s defamation suit could be considered an example of a “Strategic Lawsuit Against Public Participation,” or SLAPP case. According to the California Anti-SLAPP Project, a public interest law firm and policy organization that fights such cases, a SLAPP case[10] is “legally meritless, they can effectively achieve their principal purpose: to chill public debate on specific issues.”

Wyland’s reference to Harkey’s lawsuit could be considered to be a valid criticism that is relevant to her campaign for the state’s tax board. In the past, the business dealing of the Harkey family have been raised in her political campaigns.

In February 2013, the Orange County Register reported that a group of angry investors had demanded that Harkey resign from office[11] and abandon her candidacy for the state Board of Equalization. “Investors have lost 96-cents on the dollar invested yet you and your husband continue to live in a guard gated, ocean front home, drive a Rolls Royce, own a stable of horses and otherwise live an affluent lifestyle paid for by investors,” a letter from the investors said.

In 2009, the Los Angeles Times reported, “Harkey accepted[12] $16,600 in political contributions from real estate developers who had received loans from her husband’s business, now under investigation by the Securities and Exchange Commission.”

(Correction: This article originally said the lawsuit was for $5 million. It really was for $10 million, as the text now shows.)