Is the IRS targeting me? 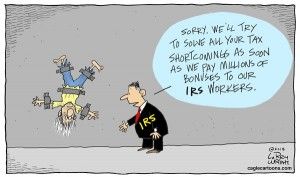 [1]I wrote a little, 10-page book on classical music that I was going to sell on Amazon’s Kindle system for 99 cents. Which means I would get 35 cents a purchase. I never was going to make any money from it.

I did everything right when I submitted it to Amazon. But when it came to the setting up the automatic IRS system that extracts a portion of my “profits,” I have had nothing but problems for days.

But no matter what I do, I can’t get past the IRS approval.

Amazon now is saying I should contact a tax accountant or the IRS. But all I want to do is sell a little book for which I will get 35 cents a pop and which nobody will buy!

I can’t prove it, but it looks like this is another case of the IRS targeting conservative and libertarian commentators. The latest: 80 percent of IRS targeted groups were conservatives[2].