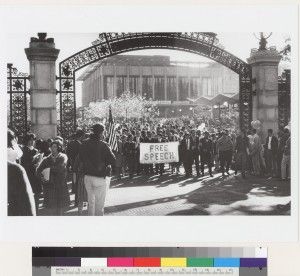 [1]Although governments regularly ignore the U.S. Constitution, this is ridiculous. Modesto Junior College has banned[2] the distribution of the Constitution on campus!

“The Constitution guarantees the right to free speech, but don’t try to pass out copies of it at Modesto Junior College in California.

“A student at the school who tried to pass out pocket-size pamphlets of the very document that memorializes our rights got shut down on Sept. 17 – a date also known as Constitution Day.

“Campus authorities told 25-year-old Robert Van Tuinen, who caught the whole thing on videotape, he could only pass out the free documents at a tiny designated spot on campus, and only then if he scheduled it several days in advance.”

What a change from my college days. When I first attended the University of Michigan 40 years ago, in 1973, a common sight was the Spartacist League[3], a group of Trotskyite communists, passing out literature. Their free speech rights were as respected as those of Republicans and Democrats.

And it’s also almost 50 years since the Free Speech Movement at Berkeley[4] (picture above).

Here’s a YouTube of the Modesto Junior College repression: