When Solyndra collapsed in 2011, the failure of the Bay Area-company got lots of media coverage. Losing more than $500 million of taxpayer funds on a project that was never really vetted by federal stimulus overseers was considered news. Duh. Here’s a good overview of scandal coverage from an East Coast newspaper. 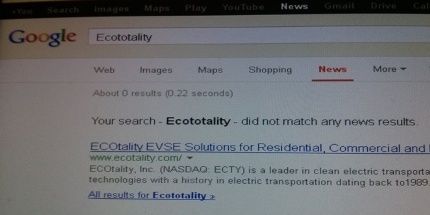 [1]But this week, when one more federally subsidized green firm went belly-up, it doesn’t even seem to be considered news in California or elsewhere.  The screen grab at right shows zero hits on a Google News search for “Ecototality.”

I only heard about it via New York state professor/blogger Walter Russell Mead, who cited this Sept. 17 Reuters report[2]:

“(Reuters) – Ecotality Inc[3], a maker of charging stations for electric cars that won a $99.8 million grant from the U.S. Department of Energy four years ago, has filed for bankruptcy[4] protection and said it plans to auction its assets next month.

“The San Francisco-based company is among a growing number of U.S. alternative-energy companies that have struggled or succumbed amid consumer resistance to the high cost and restricted driving range associated with electric vehicles. …

“Citing ‘significant liquidity constraints and the difficulty of obtaining long-term financing,’ Ecotality said an auction is necessary to maximize value for creditors and avoid a ‘fire-sale liquidation.’ …

“Meanwhile, the Energy Department on Tuesday said it will in October sell a non-performing loan made to another green car startup, Fisker Automotive.

“Ecotality’s $99.8 million grant was awarded in August 2009 to help develop the EV Project, a network of charging stations for vehicles such as the Chevrolet Volt and Nissan Leaf in major U.S. metropolitan areas.”

Apparently California journos simply don’t find it newsworthy that subsidized green ventures keep failing. It’s the norm, so why bother informing the public about it?