Weeds could whack your house and job 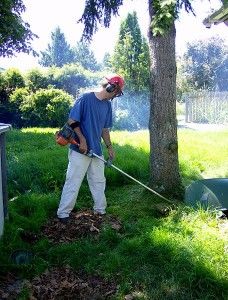 Failure to keep up your property in California could damage your credit rating, prohibit you from buying or selling property, and hurt your ability to get or hold a job, thanks to a bill recently approved by the Legislature.

Assembly Bill 683[2] empowers cities, counties and special districts (after providing notice and a public hearing) to impose an assessment and record a lien against property owners who have ignored a previous fine or penalty for violating public health and safety ordinances. If signed by Gov. Jerry Brown[3], the authorization would be in effect for the next six years.

“AB683 closes the loophole on an anomaly where cities and counties can currently recover their costs for code enforcement repair by way of lien or tax assessment — but are not able to similarly enforce fines,” the bill’s author, Assemblyman Kevin Mullin[4], D-San Mateo, told the Senate Governance and Finance Committee[5] on July 3. “AB683 simply seeks to allow local governments to enforce local law against those that are in violation of local health and safety ordinances.

“With the elimination of redevelopment, local communities now have very few tools at their disposal to combat blight. In too many instances, owners fail to maintain their properties to such an extent that they pose a health and safety threat to the rest of the community. Despite citations and findings of violation, in far too many instances owners often ignore directions to remedy the problem and refuse to pay fines after being duly found to be in violation. Under existing law, cities are hindered in their ability to enforce local nuisance ordinances. This bill simply seeks an efficient, effective remedy to enforce the law.”

Local governments on board

Naturally, California’s cities, counties and special districts are strong backers of the bill.

“The tax collectors don’t ask for this authority lightly,” Karen Lange, representing the California Association of County Treasurers and Tax Collectors[6], told the committee. “In Los Angeles County alone there’s about $30 million in uncollected code enforcement violations. Their belief is that just the authority to do this, by being able to send what we call a nastygram — ‘You better pay this or this is going to be on your tax bill’ — we think that would be a very effective authority to just be able to say it.”

“During this type of season it’s tremendously important for them to be able to prevent fire hazards that lead to significant damage of life and property,” he said.

The League of California Cities[8] is urging its members to send letters to Gov. Jerry Brown asking him to sign AB683.

“Distressed properties are a growing problem and nuisance complaints from neighbors generate many code enforcement actions,” states a sample letter[9]. “When property owners do not comply with local government abatement requests, AB683 will allow a city or county, after notice and public hearing, to recover fines through lien or special assessment against the property on which the nuisance is present. This authority is in addition to any powers a city or county may already derive from its charter. This is an efficient and common-sense tool for eliminating community blight and threats to public health and safety, while preserving due process for property owners.”

“At a time when property owners are struggling to pay their mortgages, this bill would weaken the due process requirements for local building departments to obtain property liens,” Brown’s veto message states. “Local governments already have a fair process in place, and I see no reason to change it.”

Gov. Arnold Schwarzenegger also vetoed a similar bill, AB2613[12], in 2010: “It is important that the due process rights of homeowners are balanced against a local government’s right to collect an ordinance violation fine. The current system that requires a local government to seek judicial approval to impose a lien properly balances these opposing interests.”

Lange is optimistic that AB683 will avoid the veto pen.

“We added an additional due process step,” she said. “[W]hen there’s a nuisance complaint, there is a local board that reviews the situation before it were ever to come to a collections situation. We added an additional notice that the county would provide to those persons if they exhausted all of their remedies before something would go on the tax bill.”

But the legislative analysis for AB683 either missed that distinction or doesn’t find it compelling, advising, “The Legislature may wish to ask the author and sponsor how they plan to address concerns raised in the previous veto messages.”

There was no opposition to the bill at the committee hearing or when the bill was approved in the Assembly and Senate. But the analysis states that the California Taxpayers Association[13] is opposed because “liens are a powerful tool that should only be used in the most limited circumstances. Expanding the liabilities for which a lien may be imposed to fines could incentivize local governments to increase fines and set a precedent for further expanding special assessments and liens.”

David Wolfe, representing the Howard Jarvis Taxpayers Association[14], spoke in opposition to AB129 at the Senate Governance and Finance Committee on June 22, 2011.

“We’re opposed to the bill for the simple reason we just don’t believe, especially with the high foreclosures right now in the state of California, that it’s appropriate for local governments to increase their fine and fee authority by placing liens against properties for nuisance abatement,” he said. “Which is essentially what the bill does. We just think it’s overly broad. And local governments already have the ability to use judicial liens to collect these fines and fees. I think it’s an over-reach.”

If Brown signs AB683, it could have serious consequences for property owners who fail to comply with the beefed up enforcement authority. The Franchise Tax Board[15] warns about the potential consequences on a page titled “How a lien can affect you”[16]:

So, if you’ve let your property go, you might want to get out the weed whacker or risk losing your house and job — unless Brown uses his bill whacker on AB683.