Could this man beat Jerry Brown? 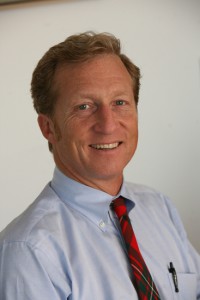 [1]Odds are, Gov. Jerry Brown will be with California until 2019. Consider the political situation.

It’s no secret that Brown, now 75 years old, would like to be the longest-serving governor in California history. Although he hasn’t formally announced, he is all but sure to run for re-election in 2014.

This likely comes as a major disappointment to several Democratic political stars in California. Attorney General Kamala Harris, Lt. Gov. Gavin Newsom, former Los Angeles Mayor Antonio Villaraigosa and current Los Angeles Mayor Eric Garcetti all want to be governor. Political handicappers — and even some of these politicians themselves — have said as much.

However, they’ll all have to wait until 2018 to significantly raise their political profile — an eternity in politics — unless one chooses to mount a primary challenge against Gov. Brown. Largely because of his political power and fundraising prowess, that’s unlikely. (Should Sen. Barbara Boxer retire in 2016, each could plausibly seek her seat.)

There is, however, one man with the potential to beat Brown in 2014. He’s not a Republican. Nor has he ever held elected office. But he has the money, national political connections, and — if he has his way — the name recognition to mount a serious challenge.

Tom Steyer, described recently in The New Yorker[3] as “a fifty-six-year-old billionaire, former hedge-fund manager, and major donor to the Democratic Party,” has made a name for himself in national and statewide political circles over the last few years. A standard establishment Democrat, Steyer has found a niche in environmental causes.

CalWatchdog.com has covered several of his recent[4] escapades[5] in California. First, in 2010, he opposed Proposition 23, which would have repealed the Global Warming Solutions Act, a law limiting carbon emissions signed by Gov. Schwarzenegger in 2006. Steyer donated more than $5 million to the “No on 23” campaign, and his political profile grew accordingly. Later, in 2012, he gave over $20 million to support a ballot proposition that would require multi-state corporations to pay taxes in California — with money going toward renewable energy projects. The $25 million wasn’t much for Steyer, who is worth nearly $1.5 billion.

He has also generously spread his money around the country. After involving himself in a Massachusetts special election earlier this year, he drew a rebuke from Rep. Ed Markey[6], who was pursuing former Sen. John Kerry’s old seat. (Steyer supported Markey, but the congressman took issue with an outsider spending in his race. Steyer has nevertheless vowed to continue donating heavily in races throughout the country.)

Steyer has also been a major Democratic Party donor on the national scene, hosting a fundraiser for President Obama at his home in San Francisco’s swanky Sea Cliff neighborhood. He also raised money for then-Sens. John Kerry and Hillary Clinton when they were pursuing the presidency in 2004 and 2008, respectively.

But beyond just throwing his money at Democratic causes, Steyer has moved to become a star himself. Opposition to Keystone XL, a transnational pipeline that would transfer oil sands from Canada to the Gulf of Mexico, is his vehicle to political fame. He has donated money, attended rallies, and otherwise done everything in his power to stop the pipeline.

Recently, he starred in several anti-Keystone XL commercials, which the New Yorker noted had a very theatrical feel:

Steyer put on a pair of khakis, changed into a blue shirt, and read his script aloud. “I’m Tom Steyer, I evaluate investments and help grow companies,” he said. “Being successful means learning the difference between a good investment and a bad deal. Today, we look at who profits when Keystone is built. Here’s a hint: it’s not America. We’re on the Gulf Coast at one of the largest refineries in the world, owned by Royal Dutch Shell and Saudi Refining. It’s where tar-sands oil piped from Canada will be refined and loaded on ships to be sold overseas to countries like China.” […]

Steyer’s boat motored through the inlet in search of another backdrop, and stopped at a refinery owned by Valero, the Texas company that happened to be his opponent during his California proposition fight in 2010. The Sanko Amity, a green-and-red tanker, was sitting idle in front of the refinery. Its ballast tank was largely empty, so the ship towered above the water. After anchoring and setting up the shot, Margolis’s partner, J. Toscano, looked into a monitor and was thrilled. “It’s so good, it’s going to seem like Green Screen,” he said.

A makeup artist touched up Steyer’s face, and he stood in front of the Valero tanker reading the script from a teleprompter, as Margolis shouted instructions. “Less angry, more factual,” he said. “More in sorrow than in anger.” After two dozen takes and some B-roll of Steyer floating past the refineries looking at pipelines, they were finished. The ad followed Steyer and Lehane’s California formula: foreign oil from Canada was being sold to foreign refiners in the Gulf and shipped to China, while the oil companies profited.

As political theatre, it was a pretty good ad. Steyer appeared honest and confident[…]

And he’s also pulling political stunts to draw attention, such as buying a “clean energy barn”[7] to put in the path of Keystone XL.

Despite his environmental activism, he is still a businessman. Until recently, he had invested in several fossil fuel companies, including one that had planned to build a pipeline similar to Keystone XL, according to the New Yorker. (He only agreed to divest once Republicans pointed out the hypocrisy of such investments.)

Still, Steyer’s future as a potential political star is bright — and mostly limited by his own decisions.

But what does he want?

Steyer’s political ambition is obvious, though he will soon have to start making choices about where to go from funding ballot propositions and activist campaigns. As a politically conscious billionaire, he has two options. He can go the way of the Charles and David Koch, who spend heavily in politics without running themselves. Or Steyer could become a politician himself, as Michael Bloomberg has.

He hasn’t announced any plans to run for office. But given his decision to place his face — and not just his money — at the front of his campaign against Keystone XL, it’s clear where his activism is headed.

Jerry Brown would be wise to take note.