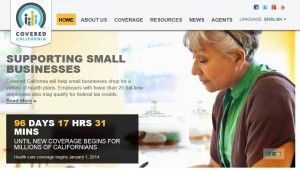 [2]As I explained in Part 1 of this series, one of the biggest features of Covered California[3], the state’s new health benefit exchange, is how it was set up. Established to implement the federal Affordable Care Act, usually called Obamacare, the state program covers health care.

But it also uses activist organizations connected to the Democratic Party to register people to vote. The funding also will boost the budgets of these organizations.

In addition, the newly created Obamacare health exchange “Assisters” [4]will be trained to sign people up[5] for social services, including welfare, food stamps and housing assistance, according to Community Health Councils, Inc[6].

In 2012, the California Legislature passed Senate Bill 35,[7] by Sen. Alex Padilla, D-Pacoima. It required that voter registration be part of the health insurance exchange.

SB35[8] creates “voter registration agencies” largely through state social services agencies. The law requires anyone applying online for service or assistance, or submitting a recertification, renewal or change of address form, to be provided an online “voter preference form.”

CalFresh, California Work Opportunity and the Responsibility to Kids (formerly CALWORKs) programs are now required to provide welfare and food stamp recipients a voter registration card, “regardless of whether they indicate they want to register of not,” according[11] to the Department of Social Services. “Under federal law, the NVRA requires states to provide voter registration opportunities at all offices that provide public assistance and all offices that provide state-funded programs primarily engaged in providing services to person(s) with disabilities. All applicants and continuing clients must be given a voter registration card (VRC) and an NVRA Voter Preference Form, regardless of whether they indicate they want to register or not.”

A state law passed in 2010[13] granted Covered California broad exemptions from the California Public Records Act. This would have limited the public’s right to access information about the contracts issued by Covered California, and the rates of payment to companies and individuals.

Five Republican U.S. senators sent a letter[14] in June to U.S. Department of Health and Human Services Secretary Kathleen Sebelius demanding a federal investigation into California’s exchange policies on concealing information. “We see no reason why a state that has been awarded nearly $910 million in federal taxpayer dollars should not disclose how that money is being spent once a contract is finalized,” the senators wrote.

After the letter, the state Legislature made an about face and passed new legislation, SB332. [15]State Sens. Bill Emmerson, R-Redlands, and Mark DeSaulnier, D-Concord, co-authored SB332, to ensure that Covered California is subject to the Public Records Act. “This bill requires that non-health plan contracts entered into with the exchange — such as those for consulting, marketing, and other professional services — as well as the payments for those contracts be accessible to the public immediately, just as they would be with any other state agency,” explained think tank California Healthline[16] in a recent op ed.[17]

It was signed into law on Sept. 11 by Gov. Jerry Brown.

According to Craig Gottwals, health insurance expert and attorney, there will be several immediate issues with Obamacare implementation in California: