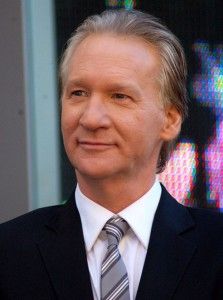 [1]I’ve never found Bill Maher funny. His 1990s show, “Politically Incorrect,” was itself 100 percent politically correct. His current show, which I occasionally land on when surfing the channels, is more of the same P.C. His schtick is to imitate a foul-mouthed Lenny Bruce routine — 50 years too late. Lenny got arrested in the 1960s for material that today makes Maher a millionaire.

Today, the only thing really daring is not having a potty mouth, but being decent.

Now Maher has taken time away from attacking religion to praising California being “back,” as Gov. Jerry Brown keeps insisting to us. Maher is late even with this, following in the footsteps of Paul Krugman[2] in March and Rolling Stone[3] in August, imitating them.

Maher’s article, “New Rule: Conservatives Who Love to Brag About American Exceptionalism Must Come Here to California[4].” Even liberals who agree with him politically must pause at his many inaccuracies. He should have asked his staff to check on some basic facts. In the following discussion, I’ll delete his profanities, which are as “shocking” in 2013 as whatever Miley Cyrus did. Maher:

“New Rule: Conservatives who love to brag about American exceptionalism must come here to California, and see it in person. And then they should be afraid — very afraid.”

What a cliche. When I use cliches, it’s because I’ve written five articles already that day and ran out of coffee. What’s his excuse?

Wisconsin faced a pension crisis and elected a Republican governor to solve it, which he did. In Rhode Island, a similar crisis was solved by Democrats themselves. As to Texas, Gov. Rick Perry has been in office since 2002. In North Carolina, years of Democratic misrule led to Republican victory.

“It wasn’t that long ago that pundits were calling California a failed state and saying it was ungovernable. But in 2010, when other states were busy electing whatever Tea Partier claimed to hate government the most, we elected a guy who actually liked it, Jerry Brown.

“Since then, everything Republicans say can’t or won’t work — gun control, immigration reform, high-speed rail — California is making work. And everything conservatives claim will unravel the fabric of our society — universal healthcare, higher taxes on the rich, gay marriage, medical marijuana — has only made California stronger. And all we had to do to accomplish that was vote out every single Republican.”

It’s not clear yet what gun control bills Brown will sign.  On immigration, the national debate actually has moved out of our state. Illegal immigration actually is increasing elsewhere in America, but not in California[5] because it’s too expensive to live here.

Proposition 215, which legalized medical marijuana, passed in 1996 when Republican Gov. Pete Wilson was in office and Republicans controlled the Assembly, the only year in the last 40 in which they controlled either house of the Legislature.

And it’s under his beloved President Obama that a war has continued[6], despite assurances to the contrary, by the federal government against California medical marijuana dispensaries.

As to voting out Republicans, in the 2010 election, none was on the ballot to vote out. At that time, only Gov. Arnold Schwarzenegger was a Republican, and he was leaving due to term limits.

As to high-speed rail, even the guy whose idea it was, former state Sen. Quentin Kopp, now says it’s a boondoggle[7].

“Higher taxes on the rich” sure happened. But the $7 billion a year from Proposition 30 was promised to go into the K-12 schools. Instead, $4.5 billion [8]of it will go to pay for the pensions of the California State Teachers’ Retirement System. That’s the number CalSTRS says is needed to keep its system solvent. Other pension demands will eat up the rest of the tax increase — and more.

As to “gay marriage,” California voters banned it two times, in 2000 and 2008. The question now is moot, of course, because of the recent U.S. Supreme Court ruling, not anything done in California. And Proposition 8 passed not because of Republican voters, but because two core Democratic constituencies, blacks and Hispanics, favored Prop. 8. Their record turnout for Barack Obama in 2008 pushed Prop. 8 over the top[9].

“Without a Republican governor and without a legislature [expletive deleted] by Republicans, a $27 billion deficit was turned into a surplus, continuing the proud American tradition of Republicans blowing a huge hole in the budget and then Democrats coming in and cleaning it up.”

Actually, the tax increase was not passed by the Democratic Legislature, but by voters with Prop. 30. Although it’s true that Republicans sometimes have blown huge holes in budgets — witness President George W. Bush — Democrats only sometimes have closed those holes. In the Bush case, President Obama made deficits even greater.

In California’s case, the deficit was so big in part because the Democrats who ran the Legislature in the mid-2000s went on spending sprees signed into law by Republican Gov. Arnold Schwarzenegger, who broke his 2003 and 2007 promises to restrain spending. But Arnold, as was detailed in the  the biography “Governator,” by Ian Halperin, after 2005 effectively gave control of his administration to his wife, Maria Shriver-Kennedy, and her friend, Chief of Staff Susan Kennedy (no relation), commonly called the “little governor” because of her great power. Both Shriver-Kennedy and Kennedy were Democrats happy to bust the budget while Arnold was tooling around his Bentley smoking stogies.

And today there is no “surplus.” If the $4.5 billion demanded by CalSTRS were included, the fiscal 2013-14 budget, which began on July 1, would be in deficit. When the next recession hits, the $20 billion-plus deficits will be back with a vengeance.

“California is about to ban lead bullets. Which is a no-brainer, because bullets don’t need lead, and lead kills birds and gets into the food supply of people who hunt their own food. Which explains why Ted Nugent is such a raving lunatic.”

Actually, as Katy Grimes wrote on our site[10], the lead bullets would be banned only for hunting. And major opponents include labor and trade union members, traditional Democratic constituencies, who like to hunt. How does that fit into Maher’s Mainchaean [11]view that the world is entirely divided up into Republicans-Bad/Democrats-Good?

The fact is that Maher is part of the new Democratic elite that’s remote from traditional Democratic constituencies, like the working class factory workers I grew up with in Michigan, including most of my family. His view of the world extends no further than Hollywood, Manhattan and Washington, D.C. Everybody else is a rube or a redneck out in Flyover Country. He also is incapable of doing even minor fact-checking with Google, or asking one of his staff to do it.

At least Miley Cyrus, as Camille Paglia urged[12], is young enough to grow up.