“Global warming deniers,” we skeptics have been called.

Much of our climate change skepticism stems from the government’s involvement and manipulation of the scientific data, and the subsequent creation of a cap and trade system, designed to punish and tax business. Cap and Trade is not about saving the planet; it is about revenues, and killing the California economy and jobs. 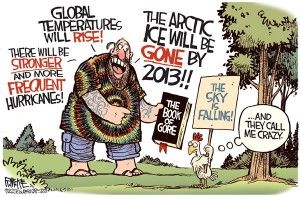 Not long ago, it became abundantly clear that no one in the state has a handle on the implementation of AB 32[2], California’s Global Warming Solution Act of 2006[3], or the potential repercussions from the vast law. California continues to forge ahead blinded by the potential revenues extorted from businesses and customers, despite the phony science and altered data.

Since Gov. Jerry Brown decided to monetize CO2 carbon emissions, and approved plans to tax utility customers, business owners and taxpayers for the emissions, the state stands to take in an extra $1 billion in revenues.

The Daily Caller recently reported [4]about this phony science. “Leaked documents obtained[5] by the Associated Press show that the U.S. government and several European governments tried to get climate scientists to downplay the lack of global warming over the past 15 years.”

“The U.S. government[6] along with some European nations tried to convince the report’s authors to downplay the lack of warming over the past 15 years,” the DC said[7]. “The highly anticipated United Nations report on global[8] warming is expected to affirm the link between human activity and global warming, but scientists are still having trouble explaining away the lull in rising global temperatures over the past 15 years despite rapidly rising greenhouse gas levels.”

“I think that the latest IPCC report has truly sunk to level of hilarious incoherence.  They are proclaiming increased confidence in their models as the discrepancies between their models and observations increase.”

… in attributing warming to man, they fail to point out that the warming has been small, and totally consistent with their being nothing to be alarmed about.  It is quite amazing to see the contortions the IPCC has to go through in order to keep the international climate agenda going.

“For years, the Elites of the West have cranked up the myth of Man Made Global Warming as a means first and foremost to control the lives and behaviors of their populations,” Pravda writer Stanislav Mishin wrote in ”Global Warming, the tool of the West[11].”

“What better way to staunch protests at worsening economic and life conditions than to make it feel like an honourable job/duty of the people to save ‘Gia.’ At the same time, they used this ‘science’ as a new pagan religion to further push out the Christianity they hate and despise and most of all, fear?” Mishin asked.

“Gia worship, the earth ‘mother,’ has been pushed in popular culture oozing out of the West for a better part of the past 1.5 decades. This is a religion replete with an army of priests, called Government Grant Scientists.”

Mishin is right. Global warming, climate change hysteria and environmentalism has become a ‘religion’ of irrational proportions. But it has also become a giant financial scheme as evidenced by the many government subsidized ‘Solyndra-type’ clean-energy scandals.

And, even as the TIME magazine cover[12] spoof showed in 2009, the United Nations IPCC[13] lied about the effects of global warming by using phony science and doctored data. It was revealed that The International Panel on Climate Change science was a deliberate hoax.

This very expensive climate change hoax appears to be thriving today under the careful manipulations of the California Air Resources Board, and Gov. Jerry Brown.

But in a 2012 interview, Dr. Richard Lindzen told the NY Times[14], “You have politicians who are being told if they question this, they are anti-science. We are trying to tell them, no, questioning is never anti-science.”