The United Farm Workers[1] labor union and the state Agricultural Labor Relations Board[2] have found themselves on the brink of ruination and even irrelevance.

The labor union boasted 50,000 members by the end of the 1970s. But according to the UFW’s last Labor Organization Annual Report filed with the U.S. Department of Labor, as of Dec. 31, 2012 the union had only 4,443 members. So it has declined by more than 90 percent. By contrast, today the California Teachers Association lists 325,000 members[4].

In order to breathe new life into the union, many in the farming community claim the ALRB and UFW appear to have joined forces to reverse their misfortune by targeting one of the biggest non-union farming operations in the state. Should they succeed in unionizing Gerawan Farming [5]employees, adding the 5,000 farmworkers would double union membership, and certainly boost the ALRB’s status.

The UFW won an election to represent Gerawan Farming[6]’s workers 23 years ago. But after only one bargaining session, the union disappeared and wasn’t heard from for more than 20 years.

Last October, the union reappeared to impose a contract on Gerawan Farming and its employees — without a vote of the workers.

“We don’t want the union,” said Silvia Lopez in a recent radio interview[7] on Fresno’s KMJ radio station with host Ray Appleton[8]. “Why is that so hard to get?”

Lopez, a 15-year employee of Gerawan Farming, is one of hundreds of farm workers who protested the ALRB and United Farm Workers recently.

“The union just came in and said they would charge us to represent us,” Lopez told Appleton. “I was worried. Where have you been?” she said she asked. “We don’t need them. We are waiting for someone to help. No one is helping. Where is Jerry Brown? Who is going to defend our rights?”

Lopez said she collected the workers’ signatures herself, crew by crew, as she counted the employees. “I wrote down everything. I know the employees of Gerawan,” Lopez said.

When the ALRB said the signatures were no good, Lopez said she was angry. “That’s a lie. I know ALRB and they’re lying,” Lopez said. “I counted those signatures. I know I turned in 90 percent of the signatures. If the union comes into our company, we are going to quit. We won’t pay 3 percent to the UFW. I don’t like the UFW. They don’t offer the benefits they promise.”

Lopez added, “Why are they scared of an election?” 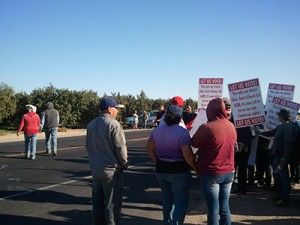 Farm employees from Gerawan Farming have been trying to get out the UFW since October 2012. The employees recently petitioned the ALRB for a vote, but it sided with the UFW to block the employees from even being able to vote on keeping or booting the UFW.

“What Would You Do?” the Help Farm Workers[10] website asks. “What would you do if representation were forced on you without your right to vote on it? What if that representation carried with it a dues tax on every dollar you earned?

“This is what faces the workers at Gerawan Farms unless the California ALRB honors their right to a fair and free election.”

” ‘There is no doubt that there are Gerawan workers who genuinely want to decertify the union at their workplace,’ the ruling states,” reported[13] the Bee. “However, ‘the evidence shows that a majority of the current employees at Gerawan have not expressed interest in decertifying the union.’”

“In a letter to Silas Shawver, regional director of the ALRB, Gerawan noted that Shawver’s math just doesn’t add up: more than 2,000 signatures from Gerawan employees were filed asking for a decertification vote, yet only 1,300 were needed and just 100 were deemed invalid,” the Help Farm Workers website[14] said.

“We believe the Petitioner and the potential voters have a right to know the signature count. Otherwise, it appears that the decision about whether to dismiss or not dismiss a petition is an arbitrary one not based on a fair and careful assessment of whether there is reasonable cause to believe there is a bona fide question of representation,” the statement said.

“Gerawan reminded the ALRB that, at Gerawan’s request, the agency officials personally met with over 2,100 Gerawan employees before the election. The Board’s agents, including Mr. Shawver, visited the farm so they could inform the workers of their right to ask for an election. “When the ALRB hides the actual signature count, as you have done, it certainly creates reason for suspicion that something is just not right.”