So, how will Obamacare work in CA?

Obamacare begins today, in particular its Covered California[1] implementation. The current “government shutdown” likely won't last more than a few days. Then enough Republicans in the U.S. House of Representatives will break ranks, join with Democrats, and fund Obamacare and the rest of the government. 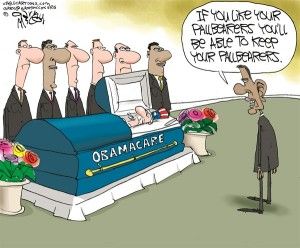 [2]The California Association of Health Plans, which will be implementing much of the program, today laid out its view of how swimmingly things will go:

SACRAMENTO, Calif., Oct. 1, 2013 /PRNewswire/ — Beginning today, Californians have the opportunity to purchase health coverage through the state's new health insurance exchange, Covered California. It is the beginning of a new era. People without employer or government health coverage will have access to a wide range of health plan options and may qualify for financial support to help to purchase coverage.

“Today's launch is an important step in expanding access to health care for Californians. By enrolling in Covered California, individuals and families will be able to comparison shop for a health plan that fits their needs, providing quality care at affordable rates,” said Patrick Johnston, California Association of Health Plans (CAHP) president and CEO.  “Covered California enrollment is available for a limited time. People, who miss the open enrollment period, ending in March 2014, will be locked out of coverage until the following year.”

Twelve regional and statewide health plans will be participating in Covered California, providing Californians with a diverse selection of plans from which to choose.

The new plans will go into effect on January 1, 2014, and will offer lower out-of-pocket expenses for deductibles and co-pays. Pre-existing conditions will no longer be taken into consideration, lifetime limits are eliminated and subsidies will be available for individuals earning up to $46,000 and for families with incomes of up to $94,200.

So that's straight from the horse-doctor's mouth: Basically, Obamacare and Covered California are transfer payments, taking money from the middle class, the upper-middle class and the wealthy, and giving it to the lower middle-class and the poor. And everything will be funneled through a bureaucratic system that will benefit such government agencies as the IRS, as well as private companies hooking in.

As to whether the poor and the lower middle-class will, as promised, pay less than they currently can with private systems, that remains to be seen. Rep. Marsha Blackburn wrote on Politico.com[4]:

Despite promises that the president’s health reforms would lower health care costs, “Obamacare” is saddled with new taxes, mandates and regulations that will increase the cost of care for families and job creators.

New requirements force Americans to purchase a health plan deemed “essential” by Congress and bureaucrats at the Department of Health and Human Services. Price controls are to be imposed nationally — despite the fact that identical requirements enacted in several states dramatically increased premiums and eliminated consumer choice. Despite President Barack Obama’s recent insistence that “Obamacare” punishes only those who can afford coverage but refuse to buy it, the health care law contains a hidden tax on Americans and small businesses that do purchase coverage.

Here’s how it works: “Obamacare” can impose a new tax on Americans through a “fee” on health care premiums, including Medicare Advantage, Part D and private Medicaid plans — making insurance companies the de facto tax collector. The law imposes this new tax on all commercially purchased health plans, with the exception of some nonprofits that earn 80 percent or more of their revenue from certain government programs.

It will hit 50 million Americans every year. The ripple effects will very likely increase premiums by billions of dollars a year for families and small businesses across the country.

The $8 billion “Obamacare” fee on insurers will increase Americans’ premiums by $10.6 billion in its first year, estimates Douglas Holtz-Eakin, a former director of the Congressional Budget Office .

That tax will be particularly hard on the poor and middle class — the very people that were supposed to benefit from the law.

Of course, Blackburn is Tennessee Republican, so Obamacare supports will say she's biased against the program. But assuming the government gets funded and Obamacare is injected into the body politic, soon we'll have real data on how it actually works.
zp8497586rq
Endnotes: