Shutdown: Where is CA now?

Another day, another case of epic gridlock in the nation’s capital. 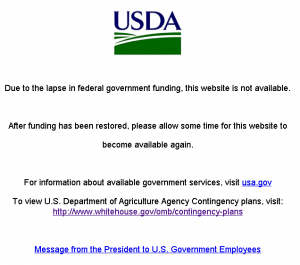 [1]Both sides have reached an impasse. It’s likely that Republicans will now try to tie any government funding deal to another deal that raises the debt ceiling[2], which will hit its limit on October 15. That’s not necessarily going to happen.

President Obama has repeatedly demanded[3] a clean-CR (continuing resolution) and a debt-ceiling increase with no strings attached. Senate Majority Leader Harry Reid, believing that Democrats will win the political battle, has followed Obama’s lead. Both sides are effectively waiting each other out, seeing who will buckle under political pressure first. (All of the major congressional leaders are set to meet with the president Wednesday evening, but it’s still unlikely that this will produce a deal anytime soon.)

In other words, this probably isn’t going to be a quick shutdown. And while dysfunction reigns in the capitol, California is taking a beating. The world economy certainly won’t collapse anytime soon, but there is undeniable evidence that furloughing hundreds of thousands of workers will have immediate effects on the economy. As the shutdown continues, it’s becoming easier to discern its effects on California.

Here’s an update of what’s happening to the Golden State:

Although 1.4 million active duty military personnel across the U.S. are safe[4] from furloughs, thousands of civilian employees that support the military will go without paychecks. Most of the 8,500 civilian employees at Edwards Air Force base in Lancaster will be furloughed[5]. Also, KPCC is reporting[6] that more than 3,500 civilians supporting the Marine Corps have been furloughed.

Tourists visiting the Joshua Tree or Yosemite National Parks were turned away; 92 Joshua Tree employees[8] are on furlough, and it’s unclear[9] whether or not visitors who made reservations at Yosemite will have their money refunded. Cash-strapped firefighters may also have more trouble[10] cleaning up the Rim Fire, which ravaged tens of thousands of acres of land. The Richard Nixon Presidential Library and Museum in Yorba Linda and portions of the Ronald Reagan Presidential Library and Museum are also shuttered.

And the shutdown won’t only affect federal government workers; private businesses that have contracts with the federal government stand to lose money as well. Gary Toebben, president and CEO of the Los Angeles Area Chamber of Commerce, told KPCC that some businesses might not get paid, though most won’t feel any impacts unless the shutdown lasts several weeks (which it might). And, of course, businesses never like uncertainty — and nothing creates uncertainty like a government shutdown.

Previously, CalWatchdog.com discussed where different California lawmakers stand on the shutdown. Those same lawmakers will also be affected by the impasse as well. Many lawmakers have sent some of their staff home, according to the Sacramento Bee[11]. It varies, though. Some offices have kept all employees in place, others have sent plenty home. Congressman Jeff Denham, R-Hawthorne, isn’t taking a paycheck himself.

Bad news for potential felons: Federal courts in California will remain open, the California News Service is reporting[12]. Anyone involved in small changes will find out about them, though major disruptions are expected.

Finally, there might be some good news for anyone having tax trouble. Callers who dial the IRS only get a message: “Due to the current budget situation, all IRS offices are closed.”