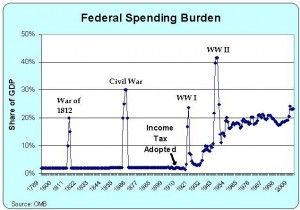 [1]Today marks the 100th anniversary of when President Woodrow Wilson signed into law America's first permanent income tax. It first was sold as a tax only on “the rich” — or, as we say nowadays, on the “1 percent.” That was true at first.

But the lusts of government for our money are infinite. Taxing the rich wasn't enough to pay for World War I, Social Security, World War II, the Cold War, Medicare, Medicaid, the Global War on Terror (GWOT), Obamacare, food stamps, Section 8 housing, the federal takeover of education, farm subsidies, etc. So the income tax quickly was extended to almost everybody with a heartbeat who went to work.

The Social Security/FICA/Payroll tax really is an income tax. So is Medicare. So will be the Obamacare tax. These programs are sold as being “insurance” policies. Except the money is not stored somewhere. It's not invested in securities or stocks, as with a life insurance policy you might take out with a private company. There's no vault where your money is kept until you need it. It's all spent on current recipients and government functionaries.

For a while, a Social Security “surplus” piled up, as the Baby Boomers paid into the system more than was taken out by their retired parents. But that “surplus” never was invested; it all was spent on current programs. Nothing was saved. Now, the Boomers themselves are retiring. Their birth rate was less than half that of their parents, meaning there aren't enough replacements-slaves to keep the system solvent. So the “surplus” is gone, contributing to the massive federal deficits.

Dan Mitchell of the Cato Institute put up a good piece on the income tax[3]:

[O]n this day in 1913, one of America’s worst Presidents, Woodrow Wilson, signed into law the Revenue Act of 1913[4], which imposed the income tax.

The law signed that day by President Wilson, to be fair, wasn’t that awful. The top tax rate was only 7 percent, the tax form was only 2 pages, and the entire tax code was only 400 pages. And a big chunk of the revenue actually was used to lower the tax burden on international trade (the basic tariff rate dropped form 40 percent to 25 percent).

We now have a top tax rate of 39.6 percent, and it’s actually much higher than that when you include the impact of other taxes, as well as the pervasive double taxation of saving and investment[5].

And the relatively simply tax law of 1913 has metastasized into 74,000 pages[6] of Byzantine complexity.

Not to mention that the tax code has become one of the main sources of political corruption in Washington[7], impoverishing us while enriching the politicians, lobbyists, bureaucrats, and interest groups. Or the oppressive[8] and dishonest[9] IRS.

However, even though I take second place to nobody in my disdain for the income tax, the worst thing about that law is not the tax rates, the double taxation, or the complexity. The worst thing is that the income tax enabled the modern welfare state.

Before the income tax, politicians had no way to finance big government. Their only significant pre-1913 sources of revenue were tariffs and excise taxes, and they couldn’t raise those tax rates too high because of Laffer Curve[10] effects (something that modern-day politicians sometimes still discover[11]).

Once the income tax was adopted, though, it became a lot easier to finance subsidies, handouts, and redistribution. As you can see from the chart, the federal government used to be very small during peacetime.

But as the decades have passed, the Leviathan state in Washington has grown. And in the absence of genuine entitlement reform[12], it’s just a matter of time before the United States morphs into a bankrupt European-style welfare state.

And as government becomes bigger and bigger, diverting more and more resources from the productive sector of the economy[13], we can expect more stagnation and misery.

That’s why October 3 is an awful day in American history. All the bad results described above were made possible by the income tax.