There are more than a dozen gun-control bills sitting on Gov. Jerry Brown's desk, awaiting his signature or veto. Brown has been uncharacteristically quiet about his stance on gun control.

Noticing Brown's silence, the association representing active and retired state fish and game wardens sent a letter[1] Thursday to the governor opposing the bill to ban lead ammunition, urging a veto.  This is fairly significant since the California Fish and Game Wardens’ Association[2] are breaking with the Department of Fish and Wildlife[3], which is supportive of AB 711[4], the lead ammo ban by Assemblyman Anthony Rendon, D-Southgate. The bill would effectively ban hunting under the guise of “protecting the environment.”

Animal rights groups, including the Humane Society[6], and Audubon California[7], are pushing for California to be the first state in the nation to kill wild game hunting. Hunting opponents claim the lead in the bullets is killing the California Condor. I wrote about this recently[8] in “CA and feds take aim at hunting ammo[9].”  By prohibiting the use of all lead ammunition for hunting in California, coupled with the federal government’s attempt to ban non-lead ammo, hunters could be left out in the woods with an empty weapon.

Despite the letter [10]to the governor, there is silence in the media about this latest opposition.

“By a unanimous vote by the CFGWA Board, and strong requests from Wardens statewide, the CFGWA joins other law enforcement colleagues and California labor leaders to respectfully urge you to veto Assembly Bill 711,” the letter[11] says. “California Game Wardens are on the front line enforcing the ban on lead ammunition for most hunting in condor range. But there is insufficient data to justify such a drastic action across the entire state.” 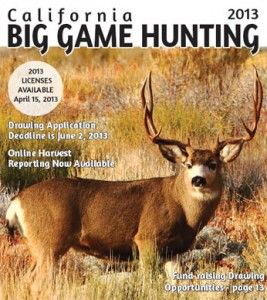 “Assembly Bill 711 passed largely because of concern over the poisoning of the California condor,” I recently wrote[14]. “But the bill was amended at the 11th hour in a secret deal to postpone the effective date until 2019. If the need for the bill is really over concerns about poisoned Condors, what about the thousands of great birds which will have died by the time the bill finally goes into effect six years from now?”

Lawrence Keane, Senior Vice President and General Counsel of the National Shooting Sports Foundation[15], recently told me[16] the science proves there is not one species impacted by lead ammunition, and the existing lead ban has not had an impact on California condors. “They are still getting lead, but it’s from paint on water towers, and micro-trash,” Keane said. “This bill is solely about preventing hunting in California. The Humane Society doesn’t care about animals dying. There is no justification for delayed implementation of the bill. This is just an effort to restrict the use of ammo in states.”

And according to Keane, the Humane Society needs California to pass the bill in order to pressure other states to do the same.

“The Centers for Disease Control and leading scientists from around the country agree that there is no safe level of lead exposure for humans,” Assemblyman Richard Pan, D-Sacramento, said. Pan is the bill's co-author.

In addition to a Center for Disease Control study refuting Pan's statement, proponents continue to ignore the data and push their anti-gun, anti-hunting agenda.

“Many of the scientific papers used by anti-lead ammunition proponents to support lead ammunition bans have consistently been critiqued for questionable scientific practices,” according to Huntfortruth.org[17]. “These researchers have used flawed scientific methodology and have selectively cherry picked data to support their preconceived conclusions, while routinely ignoring alternative sources of lead in the environment.”

In May 2008, the North Dakota Department of Health[18] and the U.S. Centers for Disease Control and Prevention conducted a study measuring the risk, if any, of eating wild game harvested with lead bullets. A total of 738 North Dakotans volunteered to have their blood tested for the presence of lead.

The study was designed to determine whether people who eat wild game have higher blood lead levels than people who don’t.

The study found no elevated levels of lead in the families of hunters, who regularly eat wild game.

Hunters have eaten venison taken with lead bullets for hundreds of years. Yet according to the NRA and Huntfortruth.org, there is not one documented case of lead poisoning from eating deer meat. Doctors are required to report all cases of lead poisoning to the Centers for Disease Control, yet according CDC Public Health adviser Kimball Credle, no cases have ever been traced to wild game meat.