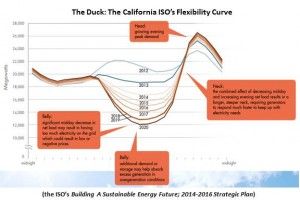 [2]Nicholas Taleb’s book, “The Black Swan: The Impact of the Highly Improbable,”[3] popularized the one-in-a-million genetic improbability of a black-colored swan as a symbol for understanding rare events. Such events included the Mortgage Meltdown of 2008, the fall of the Soviet Union in 1991, and the California Energy Crisis of 2001.  But California’s energy future is more likely to turn into an ugly duckling than a beautiful white swan by 2015, according to an analysis by the California Independent System Operator that runs the state energy grid.

The ISO recently issued comments to workshops held by the California Public Utilities Commission [4]on the flexibility of the state’s green energy grid to quickly ramp up to meet rising energy demands during the sunset hours of the day for non-peak demand months.  This ramping challenge to the energy grid has been created by the state’s 33 to 51 percent mandate for green power by 2020.  This challenge is already occurring, but will get worse by 2015.

Of particular concern to the ISO are three-hour periods when the sun goes down in January, February and March and in October, November and December of each year (called “shoulder months” by the ISO).  In a future state energy system that is half green, it would no longer be the peak hot months of the summer or an unusual winter cold snap that would present the risk of blackouts or rolling brownouts.  Instead, it would be the sunset period of each day during moderate temperature months that is likely to present a critical challenge to the reliability of electricity for customers.

Thus, California’s energy grid has to shift to being more flexible by timely deployment of hydropower, use of untried and very expensive batteries to store power[5], or the unstated possibility of using smart electric meters to bring about the ramping down of power during sunset hours in critical months. The ramping challenge has been visually depicted by the ISO in what it calls “The Duck Graph” (shown above; click to expand).

“Duck Graph” is shape of things to come

The ISO’s “Duck Graph” shows the growing need for energy flexibility starting in 2015.  On a hypothetical day in March 2015, the state’s profile looks like the shape of a duck (see above).  As solar power ramps up around 8:30 a.m., the demand for conventional sources of power conversely drops, shown as the “belly” of the duck.  And as the sun goes down about 4 p.m., solar power ramps down and the sudden demand for conventional power to replace solar power is depicted by the “neck” and the “beak” of the duck figure.

The problem is that many conventional power plants can’t be easily turned on at the flick of a switch to meet the ramping up demands. When they must ramp up to replace solar power, the cost for “peak time” power is much, much higher. Gas-fired power plants must now cover their fixed construction, operation and financing costs on about 3 hours per day, instead of 8 to 12 hours per day or more.  So the cost per megawatt hour of electricity has to go up accordingly (a megawatt hour is enough electricity for 1,000 homes for one hour).

Currently, the ISO keeps energy reserves of about 7 percent, half of which are called “spinning reserves” of gas-fired and hydropower plants that are kept running to instantly meet any emergencies.  Electricity cannot be easily and economically stored, except in a reservoir where water can be instantly released to drive a turbine to generate power. Reserves can only be used for emergencies and not to provide ramping up capability when solar panels power down at sunset.

The ISO states: “[T]here are many reasons why a resource may not wish to be considered flexible: hydro conditions, self-scheduling for maintenance, outages, or election by the resource owner not to provide flexible capacity because of the challenges and cost of infrequent dispatches or re-dispatches.”

Without grid flexibility, the ISO says: “[I]t is possible that the pool of resource adequacy resources may provide too much non-dispatchable capacity and not enough flexible capacity.”  More simply stated, it is likely that solar power may have to be “dumped” near sunset each day in moderate seasons to assure system reliability.

The ISO also cautions that “Effective Flexible Capacity” will be reduced significantly as conventional water-cooled power plants (called “once-through cooling”) are phased out to protect fish.  The ISO says this would result in green power “crowding out” the availability of flexible power.

Regulation 316 (b) of the U.S. Clean Water Act[6] requires 19 California power plants to install costly air coolers or chillers or be mothballed.  Sixteen of these power plants with 17,500 megawatts of power[7] are in ISO territory.  Three are in the L.A. Department of Water and Power territory.

Risk of inflexibility and “super ramps”

The ISO concludes: “[T]here is a risk that the (electricity) resource adequacy program would not provide the ISO with sufficient flexible capacity in 2014.  This risk becomes much greater in 2015 and beyond.”

The ISO additionally warns about “super ramps.”  For example, it points out that on Feb. 24, 2013, there was a simultaneous wind and solar drop, resulting in the necessity of a 7,500-megawatt upload ramp of conventional power from 4 p.m. to 7 p.m. That’s enough power to light up 2.5 million homes each hour.

The Sierra Club and The Utility Reform Network (TURN) accuse the ISO of using the Duck Graph to create a “forward capacity market” (p. 26).  But the primary mission of the ISO is to assure the reliability of power in a day-ahead market. Their report makes no mention of creating any new market. Instead it outlines how to use existing hydropower to meet ramping requirements. If any new market is created, it would be for untested and uneconomic storage batteries to meet the demands of green ramping.

The vision for California's future energy system has been outlined by the California Council on Science and Technology in its report: “California’s Energy Future — the View to 2050.”[10]  Twenty percent of California’s future energy[11] would be re-supplied by costly energy storage by lithium batteries, air compressors or underground salt domes using speculative technological breakthroughs that do not exist today. With the imminent risk of green ramping, California is being given to 2015, not 2050, to deploy such untested technologies.

Californians may have to become accustomed to a new lifestyle of not using air conditioning, heating or large screen TV’s from 4 p.m. to 7 p.m. during spring and fall seasons, or face electricity rate penalties made possible by smart meters.

California’s future energy system is being improvised on the fly by politicians, not power engineers. Elected decision makers have a vision, but do not entirely know whether the vision can be made technically or economically feasible.

The state’s technocratic visionaries foresee a beautiful white swan of a future energy system. However, the ISO is cautioning about the current and growing risks of the occurrence of an ugly duckling.