Are 'neo-Confederates' holding up Obamacare? 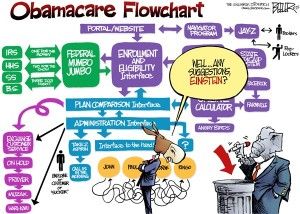 [1]Are “neo-Confederates” shutting down the government and wrecking the Constitution by trying to de-fund Obamacare? So claims longtime Republican staffer Mike Lofgren in an interview[2] with Salon's Josh Eidelson.

Pictured are two senators who are strongly against Obamacare and behind the government shutdown, Ted Cruz of Texas and Rand Paul of Kentucky. Except the Senate voted for Obamacare. Ted Cruz's family aren't Confederates, but immigrants from Cuba. Kentucky, whicn Paul represents, never left the Union; it never was part of the Confederacy. And Rand Paul's family originally was from Pennsylvania, where his father, former Rep. Ron Paul, was born. Ron Paul[4] graduated Gettysburg College, which a history says [5]owes its “inception to Thaddeus Stevens, a Radical Republican and abolitionist from Gettysburg.” If you saw last year's Steven Spielberg movie, “Lincoln,” Stevens is the firebrand abolitionist played by Tommy Lee Jones.

After becoming a medical doctor, Ron Paul served as a flight surgeon in the U.S. Air Force. Then he moved to Texas to practice obstetrics. That's why Rand grew up there. Texas in the South, but the Pauls are Keystone Staters.

“I am not an Obama partisan. I have many bones to pick with him, including the healthcare bill. If your intent was to insure as many people as possible, you’d have single payer. You also wouldn’t pay off big Pharma and the insurance companies.”

But single-payer never would have passed. And getting Big Pharma, Big Insurance and Big HMO on board was critical to passing Obamacare. Democrats learned from the 1993 Hillarycare debacle, when they were strongly opposed by the medical establishment. Remember the Harry and Louise[6] commercial? This time, the Democrats got that establishment into the operating room. It's odd that a longtime GOP staffer wouldn't know that.

“These people are basically neo-Confederate insurrectionists. They are in substantive rebellion against the orderly government of the country.”

Hardly. The GOP House funded every part of government, in separate bills, and sent the bills to the Senate — excepting only the funding of Obamacare. Under the U.S. Constitution, all tax bills must originate in the House; Obamacare obviously has taxes (the U.S. Supreme Court upheld it[7] in June 2012 precisely because it is a tax; at least according to the court).

Lofgren then brings up the deals previous GOP leaders made with Democrats. Well, we don't know yet what kind of deal House Speaker John Boehner will make with Senate Majority Leader Harry Reid and President Obama.

But here's one of Lofgren's examples:

“In the ‘80s there was a willingness to negotiate, to compromise. The Beirut bombing killed 246 Marines, and it revealed a terrible lack of cooperation between the individual services. And [Sen.] Barry Goldwater and Bill Nichols, his Democratic counterpart in the House Armed Services Committee, got together and came up with the Joint Chiefs reform act. There was no partisanship about this. It was, 'How do we fix this problem?'”

Actually, the “problem” was that the Marines were in Beirut in the first place; which is why President Reagan immediately removed them.

“I think Gingrich’s speakership was an important way station on the road to our current circumstances. Because he very much polarized things.”

That's funny. Because recently I saw on Piers Morgan's show both Gingrich and Bill Clinton saying that they cooperated to resolve the 1995 shutdown and other controversies of the late 1990s. Both said President Obama and Boehner should be talking to one another.

“Just based on intuition, I tend to think it’ll go on until sometime close to the default date, 17th of October. Because the government shutdown is a bad thing, but a default puts us into uncharted territory. When you screw around with the full faith and credit of the United States government, that’s serious.”

And with Janet Yellin becoming the new head of the Federal Reserve Board and continuing the inflationist policies of Ben Bernanke, things are just going to get worse. Because inflation is 2 percent officially (a lot more in reality[10]), but interest rates are zero, the government effectively is borrowing money at low interest rates — but destroying the savings of the middle class.

No wonder middle-class incomes have plunged 7.3 percent[11] since the Great Recession struck five years ago, including during the Obama “recovery.”

Even before Obamacare, an immense weight of regulation and taxation has weighted down the backs of the middle class to the breaking point.

I don't see any “neo-Confederates.” But what I do see is the federal government further enslaving our once-free people.