Today in America, lawyers now dictate what kids can do at recess.

A school district in New York[3] has banned footballs, baseballs, lacrosse balls or any dangerous instrument that might hurt someone on school grounds.

“Port Washington schools Superintendent Kathleen Maloney[4] said the change in policy is warranted due to a rash of playground injuries,” CBS New York reported[5]. “Some of these injuries can unintentionally become very serious, so we want to make sure our children have fun, but are also protected,” Maloney said.

So the school officials deferred to the lawyers, who apparently advocate keeping children safely indoors all day where they can’t get hurt. Blunt-nose scissors and jars of edible paste are not going to hurt anyone.

During recess at Port Washington schools, “[F]ootball is out and Nerf ball is in. Hard soccer balls have been banned, along with baseballs and lacrosse balls, rough games of tag, or cartwheels unless supervised by a coach.” 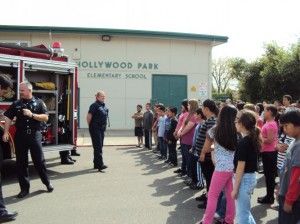 In Sacramento where I live, the Sacramento City Unified School District's[7] motto is: “Putting children first.” On the district website[8], not one elementary school had pictures of playground equipment or mention of athletic activities.

One school mentioned its “fitness program,” which  included doing “short stretches every morning and one activity per day,”  the school website[9] reported. How very civilized.

The school taught jazzercise, had a healthy snack preparation demonstration, “a visit by Sacramento United Soccer League representatives to teach students about fitness and agility, and a visit by local firefighters who talked to students about the importance of physical and mental fitness.”

I was a total rough and tumble kid. Soccer wasn’t exciting enough, so my friends and I played tackle soccer. We climbed trees and shot beebee guns at each other. We strapped firecrackers to Barbie dolls, and well, you know.  Today, I’d be arrested and so would my parents.

On the playground at school, we played dodge ball, where you actually were supposed to hit someone with a ball to tag them “out.” Dodge ball is gone. We played crack-the-whip, where kids form a human chain and whip the kid on the end around until she goes careening off and falls. And we did cartwheels. I still have the scars on my always-scabbed knees to remind me what fun recess time was.

And I got in fights but wasn't suspended.

The playground is a place where children establish social order.

The school playground back in the  1950s, 1960s and 1970s was chaos, where kids were allowed to run and play like wild animals. But it was controlled chaos, managed by the social order, and loosely overseen by the adults, who stepped in only when it got too rough.

There has been a movement for two decades to ban school recess, along with school sports.

Journalist and best-selling author Malcolm Gladwell[11] has compared professional football to dog fighting. “In what way is dog fighting any different from football on a certain level, right?” Gladwell said in a Forbes magazine story[12]. “I mean you take a young, vulnerable dog who was made vulnerable because of his allegiance to the owner and you ask him to engage in serious sustained physical combat with another dog under the control of another owner, right?”

“'Well, what's football?” Gladwell asked[13]. “We take young boys, essentially, and we have them repeatedly, over the course of the season, smash each other in the head, with known neurological consequences. And why do they do that? Out of an allegiance to their owners and their coaches and a feeling they’re participating in some grand American spectacle.”

And now four professional football players [14]are suing the NFL over concussion injuries — as if they didn’t know football was a contact sport, and were paid millions of dollars to do it.

“What does this mean for football in America?” asked Brian E. Moore, MD, on kevinMD.com[15]. “Nothing. Fans are willing to spend a lot of money to see men slam into each other’s heads on the field. But, as a parent, you can do something. You can forbid your son from playing football.”

Humans are animals too

To use another dog analogy, the playground is like watching dogs play. Dogs run like a pack, bumping, jumping over each other, play-biting and dominating, or allowing other dogs to dominate. Kids do this too, when allowed. The playground was the place we once learned how to deal with confrontation, hurt, success, physical and emotional challenges, and to face our fears.

With today's emphasis on standardized testing and academic performance, recess and sports have been sacrificed in many schools. In 1998, Benjamin O. Canada, the superintendent of Atlanta Public Schools, famously told the New York Times[16], “We are intent on improving academic performance. You don’t do that by having kids hanging on the monkey bars.”

A doctor disagrees with this dangerous trend. Dr. Romina M. Barros, an assistant professor and pediatrician, conducted the “School Recess and Group Classroom Behavior[17]” study in 2009, when the trend to cut recess and sports was growing. “We need to understand that kids need a break,’’ Barros said. “Our brains can concentrate and pay attention for 45 to 60 minutes, and in kids it’s even less. For them to be able to acquire all the academic skills we want them to learn, they need a break to go out and release the energy and play and be social.’’

The playground at school today is calm and organized, where everyone is a winner. And many of the kids are taking Ritalin[18] for Attention Deficit Disorder[19] diagnoses. But teachers are happy. And school district lawyers can rest easy.