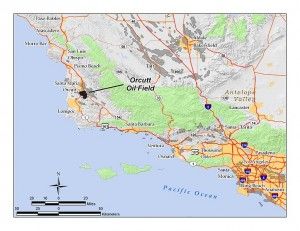 [1]Santa Barbara is ground zero for the environmental movement in California after the infamous Union Oil Company oil spill in the Santa Barbara Channel in 1969[2].  Almost 45 years later, the Santa Barbara County Planning Commission approved 136 new oil wells on 32 acres in the unincorporated area of Orcutt in Santa Maria Valley[3].

The Orcutt project signals that local governments are now willing to overcome environmental opposition in return for jobs and tax revenues.  Over 80 percent of Santa Barbara County’s debt comes from unfunded pensions[4].

Gone are the days when mainly overwhelming numbers of environmentalists showed up at County Planning meetings to oppose oil projects.  Climate Group 350[5] in Santa Barbara collected 2,700 signatures in opposition to the Orcutt project[6].  On their website, Climate Group 350 branded as “Project Deathstar”[7] the Santa Maria Energy Company Orcutt Oil Field project. The reference was to Darth Vader's world-destroying Deathstar in the 1977 “Star Wars” movie.

But those who favored the project also presented a petition to the County with 2,500 signatures.  Groups like the Economic Alliance of Northern Santa Barbara County[8] have also sprung up.  A spokesperson for the Santa Maria Valley Chamber of Commerce[9] advocated the project for the taxes that could be generated for local public schools.  The local Chamber of Commerce endorsed the oil project for the potential taxes it would generate.

Under AB32, the California Global Warming Solutions Act of 2006,[11] Santa Maria Energy would be required to lower emissions to 10,000 tons, which would be 16 percent of usual production; or mitigate the emissions by buying pollution permits on the quarterly cap-and-trade auction[12] of the California Air Resources Board.

The Orcutt Oilfield will produce oil and taxes

The Orcutt oilfield is named after William Orcutt[13], a former manager of the Geological, Land and Engineering Departments of Union Oil Company.  Orcutt discovered prehistoric fossils in the La Brea Tar Pits near the core of the City of Los Angeles.  Today, the town of Orcutt, a former home for oil field workers, has a population of about 35,000[14].

California does not have an oil severance tax.  Instead, it has a corporate tax from 15 to 35 percent on oil depending on gross revenues[16].  This would equate to $23.3 to $54.4 million per year in tax revenue.  The 8 percent sales tax in Santa Barbara County[17] could generate $1.8 to $4.3 million in additional taxes.  Combined corporate and sales taxes generate more revenues than a typical oil severance tax would.

Ironically, in 1910 Orcutt opposed a 1/8 oil royalty proposed by President William H. Taft[18] on oil field leases in Ventura and Santa Barbara Counties.  Today, it is the prospect of new taxes at a rate of about 1/7 to 1/3 of gross revenues that is opening up new well sites.

Paradoxically, Santa Barbara Channel has the largest natural oil and gas seeps in the Western Hemisphere. About 86,000 barrels of oil seep from the ocean bottom each year, the equivalent to the 1969 Santa Barbara Oil Spill.   Since 1970, there have been the equivalent of 43 “1969” oil spills.  About 6,075 tons of Reactive Organic Compounds (natural gas) seeps into the air every day from the Santa Barbara Channel and has done so since way before the Industrial Revolution and the development of carbon-based energy.

Additionally, the Orcutt oil field would provide 50 to 75 high-paying jobs.

(On a larger scale beyond just Orcutt, the U.S. Energy Information Agency says the Monterey Shale Formation could add 1.4 million jobs for California[20]. As of August there were 1.62 million workers unemployed in California.)[21]

Overall oil production is slightly down in last decade

Santa Barbara County’s oil production has fallen in half[22] since its peak in the 1980s.   The County has about 20 operators with active leases.  The expansion of the Orcutt field would increase the county’s total production by one-third to 12,000 barrels per day.  Forty new drilling projects have been proposed in the last three years. Statewide, however, the number of drilling permits substantially declined in 2012.

Tupper Hull[23] of the Western States Petroleum Association stated he doesn’t see a boom coming, however, due to the regulations and obstacles, especially in Santa Barbara.  Santa Barbara is the only county in California with its own energy department with jurisdiction over drilling.

No local water use or fracking

Water for drilling will be supplied to the Orcutt oil field from an 8-mile-long reclaimed water pipeline from the Laguna County Sanitation District.  So no water would be taken from local agriculture or groundwater basins.  Oil extraction by steaming would occur below the water table, some 1,000 feet below the ground surface[24].

Hydraulic fracturing — called fracking — of subsurface rock would not be used to extract oil.  Instead, the Orcutt oil field operator, Santa Maria Energy, would use a steam injection process that heats the oil in a well to produce sufficient oil flow.

What Turned the Tide in Santa Barbara County?

What turned the County Planning Commission to passing the proposed project amidst environmental opposition?   According to Noozhawk.com[25], it was about 25 people who showed up to speak in favor of the project, along with the 2,500 signatures on a petition expressing support for the project.

Santa Barbara County has a population of about 425,000.  It took about 0.5 percent of the population to overcome environmental opposition to new oil production at the Orcutt Oilfield.

For decades environmentalists have thwarted oil production in California[26].  If there is a prescription for change in California from the Santa Barbara example, a similar small margin of supporters will need to be active at each public hearing for new oil well installations.

Construction of the new oil wells in Orcutt will begin in about a year.  That is, unless the Santa Barbara-based Environmental Defense Center[27] appeals the County Planning Commission decision to the County Board of Supervisors.

Even if an appeal occurs, the Santa Barbara situation marks a change in the mentality in favor of drilling in California.