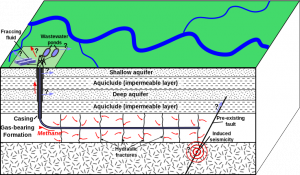 [2]A new 2013 study conducted by the University of Durham in the United Kingdom dispels the widespread contention[3] that fracking is a major threat to triggering large earthquakes in California[4] and the U.S.  Fracking is the hydraulic fracturing of subsurface rock formations to extract oil and gas by various chemical methods used since 1947, as distinguished from using steam[5].

The study is titled, “Induced Seismicity and Hydraulic Fracturing for the Recovery of Hydrocarbons[6],” was conducted by  Richard Davies, PhD. It reported that, of 198 human-induced earthquakes since 1929, only one was indirectly related to oil and gas fracking itself.

The major cause of the fracking-related earthquakes, on the other hand, was not related to fracking operations, but the disposal of fracking and shale gas wastewater required by toxic waste disposal laws.

No fracking earthquakes in California in 66 years

Based on the Durham study and other online data sources, only 10 human-induced major earthquakes from all causes occurred in California over an 84-year time span concurrent with rapid industrialization (see table below).  None was from fracking per se.

Human-Caused Earthquakes in California and Worldwide (1929 to 2013)

The Durham University study considered an alleged fracking earthquake in Ohio[8] in 2013 (up to 2.7 magnitude).  Omitted from the Durham University study was a quake in Oklahoma in 2011[9] (reported from 4.1 or 5.6 magnitude). Both the Ohio and Oklahoma earthquake swarms were caused by mandated deep reinjection of fracking wastewater into the ground to comply with state toxic waste disposal laws[10]. Two other alleged fracking-related earthquakes occurred in Canada[11] in 2009 and Great Britain[12] in 2011.

To put this into greater perspective, the UC Berkeley Seismology Laboratory[13] reports there were 558,434 total earthquakes greater than 1.0 from 1990 to 2011 in California alone.  Of earthquakes with a magnitude of 2.0 or larger, 25,383 were recorded and analyzed each year on average.  That reflects 2,115 earthquakes per month, 448 per week, and 70 per day in California.

About six to seven 5.0+ magnitude earthquakes occur each year on average in California[14].  Earthquakes of 5.0 in magnitude or with acceleration of 2 g’s (gravity force) are considered at the threshold at which damages to large lifeline infrastructure can occur[15].

There are about 1,300,000 earthquakes annually in the world over 2.0 in magnitude[16]. Fracking technology began in 1947.  Of the 85,800,000 estimated earthquakes that have occurred worldwide since 1947, possibly only four have been confirmed as indirectly caused by disposal of wastewater from fracking.  Fracking has been unregulated in California for 60 years[17].

On Sept. 23, 2013, Gov. Jerry Brown[19] signed into law Senate Bill 135[20] to build and operate in five years a statewide earthquake prediction system at a cost of $80 million. The impetus for this law was a 2013 study conducted by Caltech and the Japan Agency for Marine-Earth Science and Technology[21] that found a statewide earthquake involving both Los Angeles and San Francisco metropolitan areas may be possible.

A recent study by UC Santa Cruz seismologist Emily Brodsky[22] indicates that small, localized earthquakes from geothermal power plants, and possibly fracking, could be forecasted. But a 2012 study of the PXP Inglewood Oilfield[23] using data from Caltech sensors found no seismic activity from fracking or fracking water disposal. Experts generally agree that there is little likelihood of dangerous earthquakes generated by fracking in the Monterey Shale Formation in California[24].

No appropriation from the California General Fund was authorized under SB135.  Instead, SB135 is looking for funding from the debt-plagued Federal government.  Revenues from oil and gas companies and geothermal power plant operators may be a likely target for funding the new system. To do that, fracking and geothermal related earthquakes may have to be sold to the public as a high risk.

On October 22, an Italian court convicted seven seismologists from its “Great Risks Commission” of manslaughter[26] for providing “false assurances” of no earthquake risk involving the L’Aquila Earthquake that killed over 300 people.

This raises the question whether California’s earthquake forecast system would be prone to politicization, as with the model in Italy.

Human Induced Earthquakes in California (and other quakes)