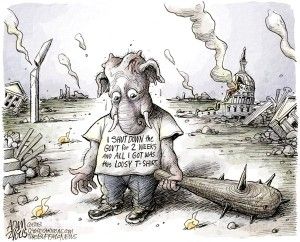 [1]The 16-day federal government shutdown is over, and America’s borrowing limit has been raised following an 81-19 vote in the Senate and a 285-144 vote in the House. President Obama signed the measure into law shortly after midnight.[2]

The fight to use the debt ceiling and continuing resolution as leverage against President Obama’s agenda, first conceived by Senate Republican Mike Lee of Utah months ago[3], began with the House passing a full repeal of President Obama’s signature health care legislation tied to a continuing resolution last month. After several weeks of receding demands, Republicans ultimately ended the fight with nothing to show but record low approval ratings[4].

The final package, however, is not permanent. Congress will have another showdown over increasing the debt ceiling sometime in March, and the federal government will only remain funded for about three months, until January 15.

It was a long, unhappy road for the Republican Party. On the right flank, conservatives had mixed feelings. Some were happy to see Speaker John Boehner embrace more conservative tactics, though they ultimately criticized the end result.

Meanwhile, moderate elements within the Party decried the entire shutdown as a spectacle. California Rep. Devin Nunes, a vocal opponent of the GOP’s strategy, compared the strategy to a suicide mission. From the Washington Post[6]:

Rep. Devin Nunes (R-Calif.) had choice words for fellow House Republicans who are willing to see the government shut down over their opposition to Obamacare: “Lemmings with suicide vests,” he called them.

“They have to be more than just a lemming. Because jumping to your death is not enough,” he said.

Recently, CalWatchdog.com pointed out[7] that several California Republican legislators were vulnerable in their reelection bids, a position worsened by the ongoing shutdown. (Rep. Nunes was not considered one of the vulnerable legislators, though he is a notable moderate.)

Here’s how California legislators ended up voting on last night’s legislation, per the Associated Press[8]:

Sens. Dianne Feinstein and Barbara Boxer both voted for the legislation, as well.