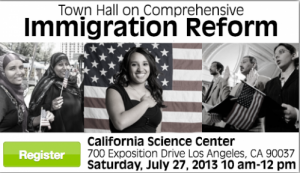 [1]President Obama, during his press conference Thursday[2], identified three policy areas where he believed Congress — at its most dysfunctional point in recent memory — could actually produce legislation. He suggested that the legislative branch pursue a farm bill, a long-term budget solution and immigration reform.

A budget conference committee has already been formed to iron out the two parties’ differences before the next shutdown — which will occur on January 15 should the House and Senate not strike a deal to keep the government open. Many observers have already thrown cold water on the idea of permanent legislation coming from the talks. And a farm bill, usually passed with an easy bipartisan vote, remains elusive, as well.

As for immigration reform, though, the picture remains murky.

President Obama said during his press conference that there was a “broad coalition” of Americans behind immigration reform, “from business leaders to faith leaders to law enforcement.” He noted that the Senate had already passed a bill earlier this year and went on:

The majority of Americans think this is the right thing to do. And it's sitting there waiting for the House to pass it. Now, if the House has ideas on how to improve the Senate bill, let's hear them. Let's start the negotiations. But let's not leave this problem to keep festering for another year or two years or three years. This can and should get done by the end of this year.

Of course, the House is in no mood to capitulate to President Obama and Senate Democrats again[4], particularly after the way that the government shutdown ended. Speaker Boehner hasn’t publicly announced any plans for the House to take up immigration reform anytime soon.

It appears as though nothing has changed since the House failed to take up the Senate’s legislation earlier this year. This is bad news for California Reps. Jeff Denham, David Valado and Devin Nunes, all of whom represent heavily-Latino districts.

The group America's Voice hired Republican pollsters Magellan Strategies to ask likely voters in the heavily-Latino Central Valley districts of GOP Congressmen Jeff Denham, David Valadao and Devin Nunes whether they support immigration reform. More than 70 percent of voters – and nearly the same number of Republicans – said they back comprehensive immigration legislation that includes a path to citizenship.

But there may be some good news for the vulnerable California congressmen. Byron York of the Washington Examiner, a critic of the Senate legislation who has closely followed immigration reform throughout the last year, wrote Thursday[6] that although the “prospect alone makes some observers laugh,” immigration reform advocates have the money and political will to continue their fight indefinitely.

An initiative with that much money and that much clout behind it can never be dismissed. Which means that even if comprehensive immigration reform appears to be dead, its opponents can never, ever assume the game is over.

A California-based immigration reform activist, speaking on the condition of anonymity to be more candid, told CalWatchdog that activists would continue a focused approach in California, pressuring House Majority Whip Kevin McCarthy, R-Bakersfield, and other vulnerable lawmakers to push their caucus forward on immigration reform.

“We’re focusing on McCarthy because we see him as reachable,” said the activist, cautioning, however, that much of the momentum immigration reform had earlier in the year was lost once it reached the House.

It would be disingenuous to say with certainty or not immigration reform will pass this year, or next. But it’s obvious that proponents of reform haven’t given up. CalWatchdog will be closing monitoring developments in the following months.